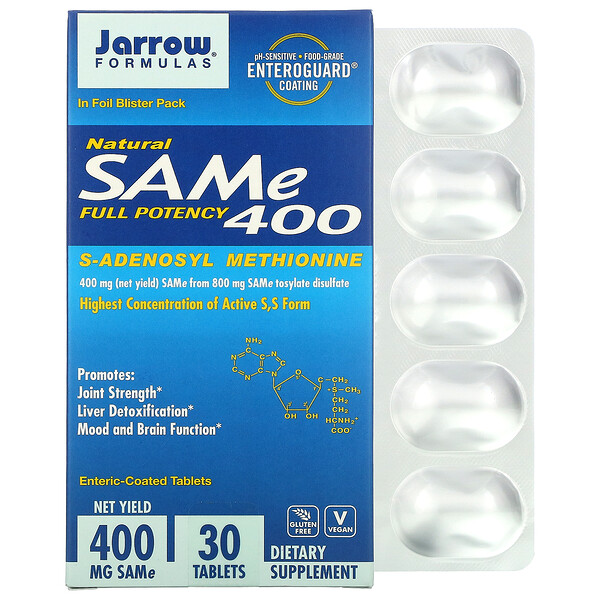 Found in all living cells, SAM-e is a metabolite of methionine (an essential amino acid). SAM-e is a chiral molecule and consists of two forms: (S,S) SAM-e and (R,S) SAM-e. The biologically active form is the (S,S) structure, while the (R,S) structure is biologically inactive. Jarrow Formulas SAM-e is made naturally by microbiological fermentation and then specially processed without chemical solvents to preserve 68-80% (S,S)  SAM-e, the highest active level available.

SAM-e has been clinically shown to have the following benefits:

SAM-e methylation reactions are involved in the synthesis of neurotransmitters such as L-DOPA, dopamine and related hormones, serotonin, epinephrine and phosphatidylcholine (a component of lecithin).

SAM-e metabolism supports the synthesis of glutathione (GSH) and glutathione-dependent enzymes (glutathione peroxidase, glutathione reductase and glutathione-S-transferase), which are components of the body's endogenous antioxidant network and important for liver function, including phase II detoxification.

EnteroGuard is a proprietary cellulose-based, food-grade, pH-sensitive enteric coating that resist stomach acid and disintegrates in the less acidic pH of the upper intestines, where the SAMe is made available for absorption.

Take 1 tablet per day on an empty stomach, or as directed by your qualified health care professional.

No wheat, no gluten, no soybeans, no dairy, no egg, no fish/shellfish, no peanuts/tree nuts

Individual using prescribed medications such as antidepressants, including Selective Serotonin Re-Uptake Inhibitors (SSRI) and MAO Inhibitors should consult a physician before using this product. Individuals with Parkinson's disease, bi-polar disorder or manic depression should not use SAM-e. Do not use if pregnant or nursing. Do not exceed recommended intake. May cause gastrointestinal upset in some persons. If you experience discomfort, discontinue use.

Jarrow Formulas Sam-e 400 is foil blister-packed to maximize stability and safety. Do not use if outer seal of blister pack is broken.

Store in a cool, dry place.

Keep out of the reach of children.