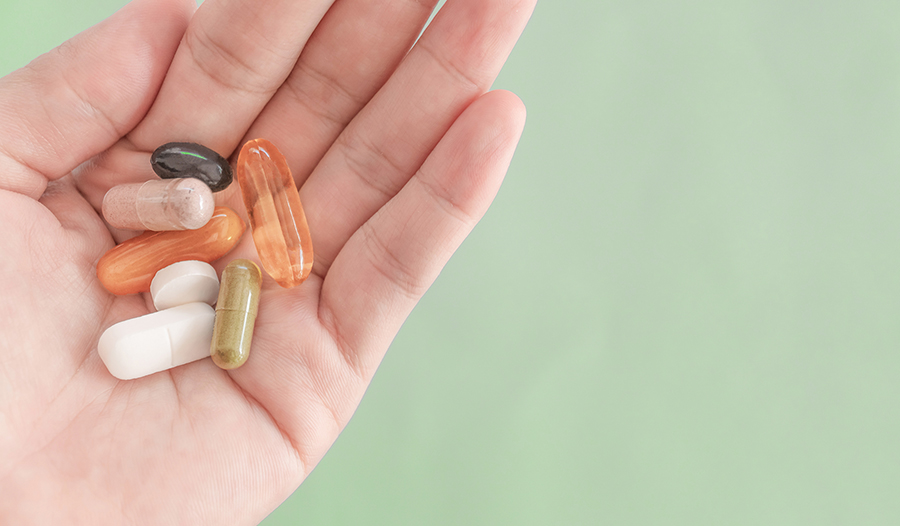 As we enter a new year maintaining good health is still on most everyone’s minds. And while building up the strength of the immune system will continue to be the focus in 2021, it is important to start looking beyond immunity and address long term health goals. It starts with a healthy lifestyle, diet, mindset, and a foundational supplement program of a multiple vitamin-mineral formula, extra vitamin C and D3, and high-quality fish oil. But when seeking optimal health we often must go beyond the basics.

Natural products such as glutathione, quercetin, melatonin, curcumin, berberine, and CoQ10 can really make a difference in improving health. In this article, you will find an overview of supplements, that based on new research and understanding, may be important to consider adding to your regimen.

The important role that glutathione plays in human health cannot be overstated. This small protein is made in our body and is also available as a dietary supplement to further boost glutathione levels. The amino acid N-acetylcysteine is also another dietary supplement that helps to increase glutathione levels. Adequate glutathione stores are critical in supporting the immune system, respiratory health, and calming an overactive inflammatory response.1 These benefits were super important in 2020 and will continue through the new year. In addition, it has long been known that low levels of glutathione lead to an acceleration of the aging process and increase the risk of aging-related disorders such as memory loss, insulin resistance, and almost every chronic degenerative condition.2,3

Learn more about glutathione and why it’s important for immune function.

Quercetin was one of the best selling natural products in 2020 for its ability to support immune function and respiratory tract health. There was also much focus on quercetin’s ability to increase the level of ionic zinc within cells.4 When zinc is in this state within cells it is able to inhibit an enzyme known as replicase that viruses use to replicate within human cells.

But that is not all that quercetin does to protect cells. It has been shown to literally activate a cellular “on switch” that acts to promote some cellular repair while simultaneously turning on an “off switch” that helps cells protect against damage or infection.5 This effect is different than its ability to act as an antioxidant as well as enhancing the system of antioxidant enzymes that support the body during times of biological stress (immune activation, inflammation, and allergies).

Quercetin has shown clinical results, including in helping reduce the likelihood for an upper respiratory tract infection.6 The challenge with quercetin has been its poor absorption. An innovative solution that improves the absorption of quercetin by as much as 10 times is to complex quercetin within a LipoMicel Matrix™. The dosage for the Natural Factors’ Quercetin LipoMicel Matrix™ is 250 to 500 mg per day, which would be equivalent to 2,500 to 5,000 mg of regular quercetin.

‌‌‌‌Optimize Sleep with Melatonin and Vitamin B12

The importance of sleep to health cannot be overstated. Unfortunately, many people really struggle to get the quality of sleep that they need. Without sleep, we struggle through the day with low energy and reduced brain power while often feeling depressed and irritable. Our health is also at risk as sleep is critical to body repair, optimal immune function and detoxification, and, of course, recharging our energy levels.

Melatonin is the most popular and well-researched natural sleep aid. It works to help people get to sleep and stay asleep through the night in order to feel well-rested7,8. But there is a secret to making it work better—combining nighttime melatonin use with methylcobalamin, the active form of vitamin B12. A protocol of taking 3 to 5 mg of methylcobalamin upon waking may help reset our biological clock and help melatonin work better in promoting a good night’s sleep, especially in people over 40 and in shift workers.

Methylcobalamin (vitamin B12) is useful in what is referred to as sleep-wake disorder. This disorder is characterized by excessive drowsiness when awake, and restless sleep with frequent awakenings. Sleep-wake disorder is very common in shift workers and the elderly. In people with sleep-wake disorders, taking methylcobalamin has often led to improved sleep quality, increased daytime alertness and concentration, and improved mood.9,10 The boost that people feel with methylcobalamin may be the result of methylcobalamin reducing the secretion of melatonin during the day and thereby helping to reset the body’s own melatonin secretion before bedtime. Taking melatonin at night further helps this process. A dose of 3 to 5 mg at bedtime is more than enough for adults. Children 6 years of age and above should take a dosage range of 1 to 3 mg.

Curcumin, the yellow-orange pigment of turmeric root (Curcuma longa), is valued for its many health benefits and has been studied in over 8,000 scientific investigations over the past 30 years.

Curcumin supports the body’s own antioxidant, anti-inflammatory, and antiaging mechanisms.11 Curcumin exerts some of its protective effects by influencing a cellular protein complex known as NF-κB (nuclear factor kappa-light-chain-enhancer of activated B cells). Whenever cell function is disrupted, whether it is due to stress, inflammation, or toxins, it increases the production of NF-κB and subsequent inflammation. Curcumin promotes proper regulation of NF-κB to improve the body’s response to inflammation and cellular damage.12

Curcumin also promotes the process of autophagy, which literally means the cell eating itself. When cells do not have sufficient energy or are being damaged by inflammation, it leads to a lot of cellular debris. Autophagy is the process of the cell destroying itself because it has become too polluted to function properly. You can think of it as pruning in order for the other cells to thrive.

Curcumin is also remarkably effective in protecting the brain against aging. This effect was best shown recently in a study conducted at the University of California, Los Angeles.13 The researchers used a highly bioavailable form of curcumin, Theracurmin. In the double-blind study, 40 adults with impaired mental function and memory were given either Theracurmin (180 mg daily) or a placebo for 18 months.5 Tests of cognition and memory were conducted at the beginning of the study and repeated every six-month intervals. Theracurmin® produced significant improvements in memory, concentration and focus, and mood scores. Improvements were also seen in brain scans of the brain in those taking Theracurmin.

Other bioavailable forms of curcumin have also been shown to improve joint health in clinical studies. In one study, those subjects taking 1,000 mg Meriva (providing 200 mg of curcumin bound to phosphatidylcholine) for 3 months saw their joint discomfort scores decrease by 58%, and the walking distance in the treadmill test increase from an average of 76 meters at the beginning of the study to an average of 332 meters. 14

Even regular curcumin powder has shown benefits in improving joint health. In one study, a daily dosage of 1,500 mg per day of curcumin for 4 weeks improved knee stiffness, discomfort, and function.16

The dosage of a curcumin preparation ideally should be based upon clinical evidence of safety and health benefits. These are recommended levels for the various popular forms:

One of the most exciting natural products in current medical research is berberine, an alkaloid found in goldenseal root, barberry bark, Oregon grape root, and coptis (goldthread) root. What is so exciting about the research is the extremely positive effects of berberine in helping improve issues that many people struggle with such as blood sugar control, weight loss, and metabolism.

Berberine exhibits a number of beneficial mechanisms to produce these effects including an ability to activate the important enzyme called AMP-activated protein kinase or AMPk for short. AMPk is found inside every cell and serves as a “master regulating switch” for activating mitochondria, the energy compartment of cells, to increase energy metabolism.

Overall, the activity of this enzyme plays a major role in determining the action of insulin as well as body fat composition, especially the amount of visceral or “belly” fat. Clinical studies have shown berberine at a dosage of 500 mg three times per day before meals can improve metabolism and insulin sensitivity leading to an average weight loss of five pounds more than a placebo group over a 12 week period.15-17

Berberine also is good for the intestinal microbiome, the collection of microorganisms that live within us. In fact, many of the benefits of berberine are through improving the growth of beneficial bacteria. Not surprisingly, berberine has outperformed probiotics in improving digestive function and relieving gas, bloating, and improving bowel habits.18

As mentioned earlier, mitochondria are the energy-producing compartments within our cells. To have vital health and abundant cellular energy, we need exceptional mitochondrial energy production. A great strategy to enhance mitochondrial function is to use two dietary supplements that have been shown to work together - coenzyme Q10 (CoQ10) and pyrroloquinoline quinone (PQQ).

CoQ10 is very well known, but PQQ is just beginning to gain popularity. CoQ10 acts like a sparkplug in energy production, while PQQ serves a complimentary role and is a powerful antioxidant that specifically protects against mitochondrial damage. PQQ also promotes the spontaneous generation of new mitochondria within aging cells, a process known as mitochondrial biogenesis. This effect is why PQQ is so exciting as an anti-aging strategy.

While both CoQ10 and PQQ are effective on their own when they are combined even better results have been noted. This synergistic effect was first seen in animal studies and further demonstrated in human double-blind, placebo-controlled clinical trials. In one study of 71 middle-aged and elderly people aged between 40-70, supplementation with 20 mg per day of PQQ resulted in improvements on tests of higher cognitive function compared to the placebo group. But in the group receiving 20 mg of PQQ along with 300 mg of CoQ10, the results were even more dramatic. PQQ and CoQ10 are both involved in mitochondrial energy production, so these results are not that surprising.19,20

As far as the dosage recommendation, I would stick to the clinically proven dosage of 20 mg PQQ and 300 mg of CoQ10. Several manufacturers offer PQQ and CoQ10 in combination.

How To Design A Daily Supplement Regimen

Adding supplements to your healthy lifestyle? A doctor gives his tips for getting started with a supplement regimen and shares his top 5 supplement essentials.

The Top 3 Supplement Predictions for 2023 According to a Doctor

A doctor predicts that these three supplements will be everywhere in 2023 for those looking to support the health of their gut, skin, and heart. Find out why.