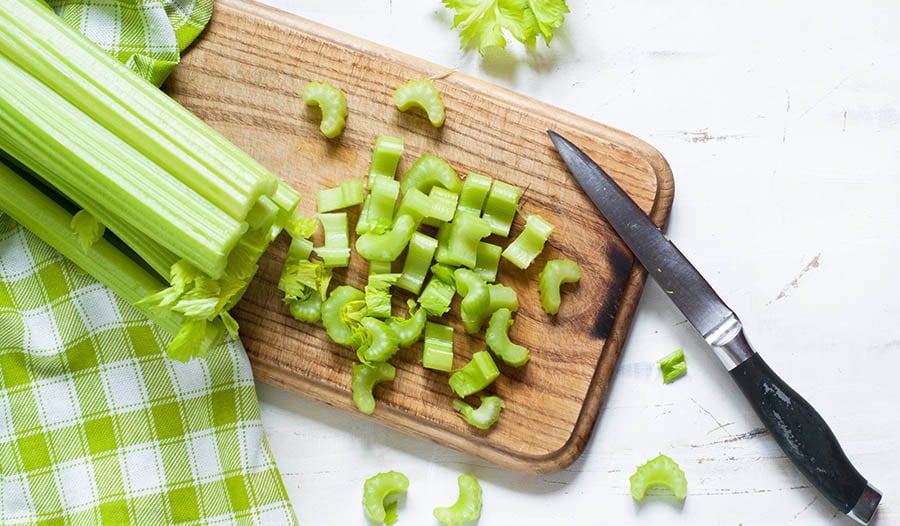 Celery is a member of the umbelliferous family, along with carrots, parsley and fennel. The celery we see today originated from wild celery native to the Mediterranean, where its seeds were once highly valued as a medicine. As with many other folk remedies, modern research is upholding the medicinal value of this common vegetable. In particular, scientists are evaluating the most powerful healing factor of celery—a compound known as 3-n-butylphthalide, or 3nB.

3nB is unique to celery and is responsible for the vegetable’s characteristic flavor and odor. It was discovered as the active component of celery by researchers who were seeking to explain some of the vegetable’s medicinal effects. 3nB first drew significant scientific attention when researchers at the University of Chicago Medical Center identified it as the component responsible for celery’s blood pressure-lowering effect.

The research was prompted by one of the researcher’s fathers who, after eating a quarter-pound of celery every day for a week, observed his blood pressure dropped from 158 over 96 to a normal reading of 118 over 82. Subsequent animal studies found that a very small amount of 3nB lowered blood pressure by 12 to 14 percent, and also reduced cholesterol by about 7 percent.

How Does 3nB Lower Blood Pressure?

The blood pressure-lowering effect of 3nB appears to be a result of several factors. Blood pressure refers to the force with which your blood flows through your vessels. High blood pressure is usually the result of too much fluid in your blood and inflexible or resistant blood vessels. Sodium (salt) retention leads to increased fluid volume in the blood, while hardening of the arteries and the hormones released during stress lead to loss of flexibility or constriction of blood vessels. If you put your thumb over a garden hose, the pressure against your thumb and the resultant pressure of the flow of water out of the hose can be reduced by either turning down the faucet (reducing the fluid volume) or by letting more water flow out of the hose (dilating the vessel).

To treat high blood pressure, doctors usually prescribe diuretics (water pills) to reduce the fluid volume; and vasodilators to relax the arteries to reduce the resistance of blood flow, or beta-blockers to turn down the pumping action of the heart. 3nB appears to help lower blood pressure by acting both as a diuretic and vasodilator, as well as working in a manner similar to drugs known as calcium-channel blockers. 3nB has also been shown in animal and test-tube studies to lower cholesterol levels and reduce the formation of arterial plaque. This effect may increase the elasticity of the blood vessels and thus lead to lower blood pressure readings. In addition, 3nB appears to have some effect on areas and systems of the brain that control vascular resistance.

Another real advantage of celery seed extract over conventional drugs used in high blood pressure is that the drugs lower blood flow to the brain. While this effect is helpful in reducing the likelihood of stroke, it often makes people feel tired, depressed, dizzy and forgetful. Celery seed extract, on the other hand, has been shown in animal studies to not only help prevent stroke but also to improve blood flow and protect the brain and enhance brain energy production in a manner similar to Ginkgo biloba extract. Celery seed extract has also produced dramatic recovery in neurological and brain function in animals in studies that simulate a stroke. In addition, it has been shown to significantly increase life spans in animals.

What Other Effects Have Been Noted With 3nB?

3nB has shown tremendous promise in animal studies as an anticancer phytonutrient and detoxification aid, but its use as a pain reliever in arthritis, fibromyalgia and gout is getting most of the attention.

Celery seed extracts standardized to contain 85 percent 3nB has been evaluated in the treatment of rheumatism—the general term used for arthritic and muscular aches and pain. In this study, 3nB’s efficacy was evaluated by well-established clinical protocols used to measure the effectiveness of conventional drugs used in arthritis and muscular pain. These protocols allow objective measures of clinical pain that can be assessed statistically and for individual comparisons. Due to the chronic, fluctuating nature of rheumatism, the study compared results with and without 3nB supplementation.

During the 12-week study, 15 subjects suffering from either osteoarthritis, osteoporosis or gout received 34 mg of the celery seed extract twice daily. Each subject’s pain had been present for approximately 10 years in a remittent or continuous form, and it led to a lack of joint mobility and pain that prevented the carrying out of household duties, hobbies and other activities.

The results of the study were extremely positive and quite statistically significant. The chance that these results were due to a placebo effect is less than one in 1000. After three weeks of taking the celery seed extract, the average reduction in subjects’ pain scores was 68 percent, with some subjects experiencing 100 percent relief from pain. Most subjects achieved maximum benefit after six weeks of use, although some did notice improvements the longer the extract was used. Detailed blood chemistry, as well as clinical evaluation of the subjects, did not turn up any side effects. Many subjects noticed the celery seed extract produced a diuretic effect, but no changes were noted in their sodium and potassium balances.

Based on the positive results in this small pilot study, a larger 70-patient study was conducted. Subjects received 75 mg of the celery seed extract twice daily for three weeks. At this higher dosage, subjects reported even better results than in the pilot study. Statistically and clinically significant reductions were noted in pain scores, with improvements noted in mobility and quality of life. Again, no side effects were noted other than the diuretic effect with no changes in the sodium and potassium balance. The celery seed extract appeared to be particularly helpful for sufferers of gout, as 3nB appears to lower the production of the uric acid that causes gout by inhibiting the enzyme xanthine oxidase.

What is the Proper Dosage?

More than 100,000 people in Australia have now used this proprietary celery seed extract standardized at 85 percent 3nB without any reports of side effects. The current dosage recommendations, based on the information available from trials as well as clinical experience, are:

For the relief of joint and muscle pain (including pain due to osteoarthritis, rheumatoid arthritis and fibromyalgia): One tablet two to three times daily.

Study results indicate that as long as the celery seed extract is used, it keeps pain at bay. But if it is stopped, the pain tends to recur.

How Much Should I Take for High Blood Pressure?

My recommendation is to either consume eight ribs of celery per day or take a celery seed extract standardized to contain 85 percent 3nB and other celery phthalides at a dosage of 75 to 150 mg twice daily.

Can I Take Celery Seed Extract With Conventional Anti-inflammatory Drugs?

Yes. There does not seem to be any adverse interactions with conventional drugs.

Are There Any Contraindications?

Since the effects of celery seed extract have not been evaluated on pregnant women, it is generally recommended that it not be used during pregnancy or lactation. No other contraindications are presently known. I would advise as a precautionary recommendation that people taking the drug Coumadin (warfarin) be closely monitored by their physician when starting to use celery seed extract.

How Does 3nB Work to Produce All of These Benefits?

Based upon all of the existing research, it is clear that 3nB exerts a profound effect on many of the body’s control systems—chiefly the prostaglandin system. Prostaglandins are chemicals that control many important body processes, including regulating inflammation, pain and swelling; blood pressure; and heart, digestive and kidney function.

Some of the effects noted for 3nB on the prostaglandin system are quite unique. Rather than simply inhibiting the production of prostaglandins by blocking enzymes that produce them—which is what aspirin or the more expensive and selective Cox-2 inhibitors do—3nB appears to help restore balance in the prostaglandin system. Exactly how it accomplishes this is still a mystery. Drug companies are researching the unique effects of 3nB in order to develop drugs that can be patented and sold for a huge profit. It does not look like that line of research is necessary, however.

Oil is such a trend in the wellness space these days. From the never-ending coconut oil debate, to the various benefits of aromatherapy essential oils, and using them for beauty purposes like oil cleansing and oil pulling—it seems like oil is a buzzword that won’t be going away anytime soon! When it comes to black seed oil, the hype is well-deserved.

Phytosomes are advanced forms of herbal products that are better absorbed, utilized, and as a result produce better results than conventional herbal extracts.