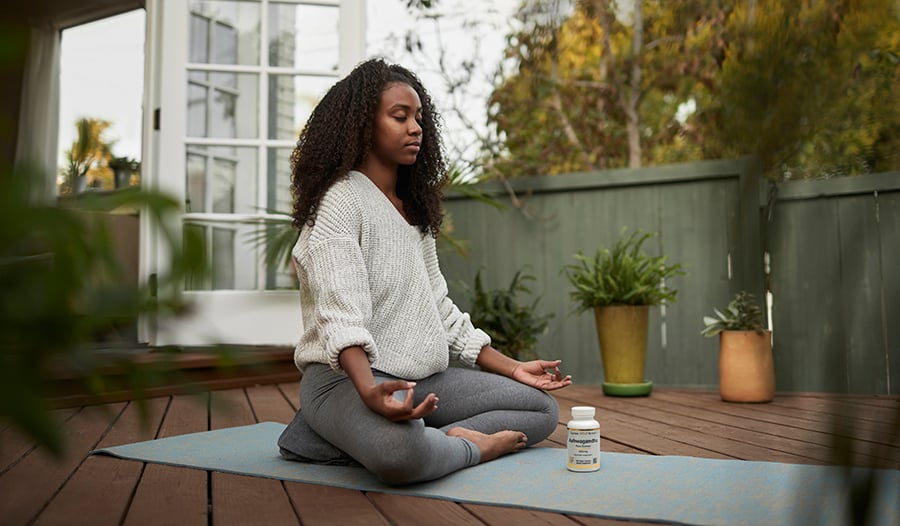 Ashwagandha is a key herb in Ayurvedic medicine, a healing system that has developed over the last 3,000 years. Ayurvedic medicine is based on the belief that health and wellness depend on a delicate balance between the mind, body, and spirit. Its main goal is to promote good health, not fight disease. Ashwagandha fits perfectly into this model.

In Ayurvedic medicine, the root and leaves of Ashwagandha are the most valued "rasayana," or substances that possess rejuvenating properties. For over five thousand years, Ashwagandha has been much revered for its longevity-promoting and revitalizing properties. Modern science has now documented these benefits and many more.

The name Ashwagandha is Sanskrit for smell of the horse. The term is fitting, not only does the root have a unique smell, but it also increases strength. Ashwagandha is frequently referred to as “Indian ginseng” because its rejuvenating effects parallel those of ginseng. However, Ashwagandha is not a member of the same botanical family as either Panax ginseng or Siberian ginseng (Eleutherococcus senticosus).

Ashwagandha contains many active compounds, but the “withanolides” are thought to be the most important and often serve as marker compounds in the production of high-quality extracts.

Ashwagandha acts as an adaptogen in our bodies. This term, adaptogen, is used to describe herbs that increase our ability to deal with stress, boost energy levels, and improve our general well-being.

Adaptogens have been shown to help regulate the balance of several hormones and neurotransmitters involved in the stress response, including cortisol. In addition to ashwagandha, other well-known adaptogens include Chinese ginseng (Panax ginseng), Siberian ginseng (Eleutherococcus senticosus), and arctic root (Rhodiola rosacea). All of these plants exert beneficial effects on adrenal function and enhance resistance to stress, and have historically been used to:

High-quality standardized extracts of Ashwagandha have considerable support in the medical literature as adaptogens, the most well-researched extracts are Sensoril (standardized to contain 10% withanolides) and KSM-66 (standardized to contain 1.5% withanolides). These Ashwagandha extracts are a bit different in their chemical composition and dosage, but they appear to exert similar effects and there is good clinical research showing these preparations exert adaptogen effects as well as an ability to:

One of the best ways to increase the ability to deal with stress more effectively is by increasing sleep quality. A good night’s sleep raises energy levels, mood, and the threshold for feeling stressed. Several studies have shown Ashwagandha helps improve sleep quality and this effect is another stress-fighting mechanism. In one double-blind, placebo-controlled study, 60 patients with poor sleep quality were given either KSM-66 (300 mg) or placebo twice daily.2 The Ashwagandha preparation was shown to improve sleep quality in a very statistically significant way. The time required to get to sleep was reduced along with reduced nighttime awakenings, and overall sleep quality was improved based upon the results from the Pittsburgh Sleep Quality Index (PSQI). The PSQI is a self-administered questionnaire to measure sleep quality and patterns through estimating the outcome of seven components of sleep quality, i.e., subjective sleep quality, the time required to get to sleep, sleep duration, nighttime awakenings, sleep disturbances, use of sleep-promoting medications, and daytime fatigue over the period of a month. The group getting the KSM-66 experienced a progressive improvement in the PSI over the course of the month and a 69% improvement overall vs. 11% in the placebo group.

Ashwagandha is of particular benefit to people experiencing significant stress in their life. It helps support sleep quality, adrenal function and reduces feelings of anxiety. In a human double-blind study in subjects who were experiencing significant signs of chronic stress, the subjects were given either Sensoril or a placebo at a dosage of 125 to 250 mg one or two times daily.3 The group getting the Sensoril demonstrated significant improvements in feelings of calmness as well as reductions in cortisol levels, pulse rate, blood pressure, and C-reactive protein (a blood marker for inflammation) reduced by 36% compared to only 6% in the placebo group. There was also a significant increase in the blood levels of DHEA and a dose-dependent response in lowering fasting blood glucose and improving the serum cholesterol levels. In other words, these latter effects were mostly seen in those getting the 250 mg twice daily dosage.

In another double-blind study, 64 subjects with a history of significant chronic stress were given KSM-66 (300 mg) or placebo twice a day for 60 days. The group getting the Ashwagandha extract exhibited a significant reduction (P<0.0001) in scores on all stress-assessment scales at the end of the study. This improvement paralleled a substantial reduction in serum cortisol levels in the Ashwagandha group.4

Even people who are not experiencing significant stress can benefit from the adaptogenic effects of Ashwagandha. In a double-blind study in 50 healthy male/female athletes given a KSM-66 (300 mg) or placebo twice daily for 12 weeks, those getting the Ashwagandha extract experienced significant improvements in both quality of life scores and exercise capacity (VO2max) compared to the placebo group.5

Preclinical and clinical studies show Ashwagandha components to exert antioxidant effects and a number of other effects specific to protecting the brain.6 These actions may play a role in some of the clinical effects noted in Ashwagandha extracts improving brain function. For example, in one double-blind study, 20 healthy male participants were randomized to receive Sensoril® (250 mg) or placebo twice daily for a period of 14 days to gauge the effect on brain function.7 Results were impressive in that they showed Sensoril® to improve reaction times and task performance in all of the six tests of cognitive function, but did not improve the finger tapping test used to measure improvements in brain to muscle function.

In another double-blind study, KSM-66 was evaluated for its ability to improve memory and cognitive function in adults showing some effects of aging.8 The 50 subjects were treated with either KSM-66 (300 mg) or placebo twice daily for eight weeks. A variety of well-accepted tests for memory and cognitive function were used. Improvements with KSM-66 were noted in both immediate and general memory, as evidenced by subtest scores for logical memory, verbal memory, faces, and family pictures. The Ashwagandha group also demonstrated significantly greater improvement in executive function, sustained attention, and information-processing speed. These tests reflect effects on the ability to think (cognitive function).

Other studies have shown Sensoril, KSM-66 and other Ashwagandha extracts to produce a variety of different effects on improving brain function, especially in the elderly. Some of these benefits may be the result of improved sleep quality.9\

True to its historical use, Ashwagandha has shown to increase physical strength. For example, in one double-blind study, 38 active men ranging in age from 20 to 32 years old took either Sensoril (500 mg daily) or a placebo for 12 weeks.10 Measures of muscular strength, power, and endurance, and 7.5 km cycling time trial were measured at baseline and after 12 weeks of supplementation and training. Subjects were required to maintain their normal dietary habits and to follow a specific, progressive weight-training program (4-days/week, upper body/lower body split. The Sensoril group demonstrated significant improvements in average squat power, peak bench press power, 7.5 km time trial performance, and perceived recovery scores.

Endurance athletes can also get a boost from Ashwagandha. In a double-blind study with 50 healthy male and female athletes were given either KSM-66 (300 mg) or placebo twice daily for 12 weeks. The Ashwagandha group demonstrated increased cardiovascular endurance. All of the subjects had their endurance assessed by measuring the oxygen consumption at peak physical exertion (VO2max) levels during a 20-meter shuttle run test. The increase in the VO2max from baseline at week 8 was 4.91 in the KSM-66 group compared to 1.42 in the placebo group, at 12 weeks it was 5.67 and 1.86 respectively. In addition, the KSM-66 showed significant improvement in the World Health Organization self-reported quality of life questionnaire which includes physical health, psychological health, and social relationships.5

Ashwagandha has been found to exert a number of benefits in supporting male fertility and reproductive health.12 Specifically, clinical studies in men with low sperm counts have shown Ashwagandha to enhance sperm concentration by 167%, semen volume by 59%, and sperm motility by 57%. These benefits are the result of Ashwagandha reducing oxidative stress in the testes, improving energy production in sperm formation, and improving hormone levels in these men. And it is not just about increasing testosterone by 17%, but also improving the balance of other sex hormones leading to improved function and weight of the testes. All of these effects lead to enhanced fertility.

Thyroid hormones are critical to cellular function throughout the body. Low levels of thyroid hormones T4 and T3 lead to many signs and symptoms such as weight gain or an inability to lose weight, fatigue, lack of concentration, and low mood. Clinical hypothyroidism is based upon blood levels and requires the use of prescription thyroid hormone. However, there is a gray area of low thyroid function where the laboratory values are within the normal range, but the thyroid is not functioning at full capacity. This situation occurs in about 3%-8% of the global population.

The thought is that Ashwagandha’s anti-stress and cortisol-lowering effects are responsible for the improvement in thyroid function. Chronic stress and elevated cortisol are known to disrupt thyroid activity.

The dosage of Ashwagandha depends upon the form, concentration of the active compounds, and quality of the product. Most of the clinical research has focused on two commercial preparations, Sensoril and KSM-66. Here are the typical dosages for these forms:

If using similar extracts to Sensoril or KSM-66, the dosage should also be similar. In regards to using crude preparations of Ashwagandha dried root, keep in mind the dosage range for this form is 3,000 to 6,000 mg per day.

Ashwagandha is generally very well-tolerated with no significant side effects.14,15 Clinical and safety studies with Sensoril and KSM-66 did not show any side effects relative to the placebo. There are no confirmed drug interactions at this time.

Nature provides us with several plants that can help our body fight the effects of stress. These beneficial botanicals are often referred to as “adaptogens,” because they help us adapt to, or cope with, stress.

Stress is an unavoidable part of life. These herbs, supplements, foods, and lifestyle hacks for managing stress help you keep your calm in the face of pressure.