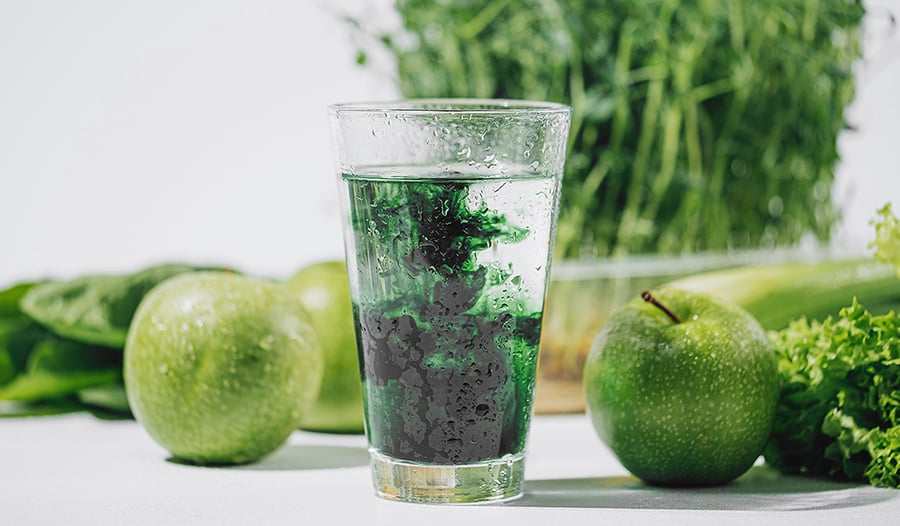 Responsible for the peaceful hues we find in parks and forests, chlorophyll is the green pigment in plant cells responsible for producing energy by way of photosynthesis when exposed to sunlight. Available from plants or supplements, chlorophyll has health benefits that can improve your overall wellness both inside and out.

When chlorophyll gets taken in a supplement form, it is technically known as chlorophyllin, which contains the mineral copper instead of the magnesium found naturally in chlorophyll’s molecular structure.

What Are the Health Benefits of Chlorophyll?

Chlorophyll has seven evidence-based health benefits you may enjoy.

Chlorophyll Aids DetoxificationA study found that chlorophyll can reduce aflatoxin biomarkers by 55% compared to placebo. Aflatoxins are poisonous carcinogens produced by molds, especially genus Aspergillus. These mutagens can grow on foods such as tree nuts, rice, spices, and figs. Aflatoxicosis or acute poisoning with aflatoxins can cause significant damage to the liver and may lead to acute liver failure.

According to research, taking a chlorophyll supplement may decrease ingested aflatoxin levels. Some studies also show that chlorophyll can bind to heavy metals and therefore helps to eliminate them from the body.

After one month of treatment, the following results were recorded:

No adverse reactions occurred in the chlorophyllin group. While more research is needed, chlorophyll may be an effective natural solution for increased white blood cell production.

Chlorophyll has also been shown to protect cells from oxidative damage by removing free radicals. Several studies report chlorophyllin acts as an antioxidant in both human and animal studies. This action protects the body from oxidative stress that can come from toxin exposure and the aging process.

Chlorophyll is considered the blood of plants, with benefits for the blood of humans as well. An interesting study found that mammalian mitochondrial cells were able to produce more adenosine triphosphate (ATP) when exposed to chlorophyll and sunlight. ATP is what gives mammals the energy they need. That would suggest that through chlorophyll consumption, animals can also create energy from the sun.

Another study looked at the effects taking wheatgrass had on patients with thalassemia, a blood disorder where the body does not produce enough hemoglobin, the protein that carries oxygen on your red blood cells. The study found that fewer blood transfusions were needed in those who took the wheatgrass supplement.

The benefits of improved red blood cell quality can significantly impact your health, energy, and wellbeing. Increased hemoglobin levels will increase circulating oxygen levels which improves energy and cellular function throughout the body.

Research has also shown that chlorophyllin may reduce bacterial growth and inflammation in skin wounds. That also will help wounds heal faster and reduce the risk of infection. Chlorophyll can be helpful in the treatment of burns and ulcers, stimulating the growth of new tissue formation.

A topical application of chlorophyll may have anti-aging properties due to its antioxidant properties. By also supporting healthy mitochondria, which play a key role in disease formation and premature aging, chlorophyll can help support a youthful appearance and healthier cells as we age.

5. Chlorophyll May Help With Weight Loss

A small study of 38 females found that the participants who took a supplement containing chlorophyll once daily lost more weight than those who did not take the green plant membrane supplement. The study found reduced cholesterol levels in the group who took the supplement as well. The researchers did not conclude which ingredient in the supplement was responsible for these findings.

Chlorophyll has also been shown to reduce appetite and food intake in animal studies. This effect, along with chlorophyll’s ability to increase feelings of satiety, helps prevent weight gain. Considering these physiological benefits, chlorophyll is an ideal natural green supplement for weight loss support.

For those suffering from trimethylaminuria, a medical condition that causes a fishy body odor, chlorophyll may be the answer you are looking for. A study found that chlorophyllin significantly reduced the number of trimethylamines, the odor-causing molecules responsible for the fishy smell.

Chlorophyll has also been proven to decrease odors caused by bacteria. This special property is responsible for chlorophyll’s reputation as a breath freshener and natural deodorizer.

Due to the potential increase in red blood cell production, taking chlorophyll may help improve energy levels. Your red blood cells carry the oxygen needed for energy production and optimal cellular function throughout the body. With higher levels of circulating oxygen, energy levels improve along with increased physical stamina.

Research has shown that chlorophyll builds up in the mitochondria, or cellular powerhouses, in animals that eat a chlorophyll-rich diet. Inside the cells, chlorophyll can donate electrons to coenzyme Q-10, which significantly increases ATP production. Increased ATP production means more energy is available to be used throughout the body.

You can enjoy a healthy serving of chlorophyll from any green plant-based food, including herbs and vegetables. Foods such as arugula, parsley, wheatgrass, spinach, collard greens, broccoli, and alfalfa are naturally rich in chlorophyll. However, it is believed that natural chlorophyll may not survive the digestive process long enough to be absorbed, so taking a chlorophyll supplement is a good idea.

How to Take Chlorophyll Supplements

Chlorophyll supplements come in many different forms for a variety of consumption methods, including liquid, tablets, powders, and topical salves. Most manufacturers recommend taking 100 to 300 mg of chlorophyll daily. However, it is best to follow the instructions on the supplement label for the best outcome.

Topical chlorophyll ointments may cause itching or burning when applied, so it is best to apply them to a small test area first.

Always talk to your doctor before beginning a new supplement routine.

Previous Article
How to Balance Vitamin D, a Healthy Tan, and Sun Protection
Next Article
How To Relieve Burnout and Stress According to a Naturopathic Doctor

Liquid Chlorophyll Is Trending In Skincare Right Now—Here's Why

What is chlorophyll? This green pigment found in algae and plants is touted for its detoxification, antioxidant, and skin health benefits.

Discover the health benefits of beta-carotene and how it can improve your lung, skin, immune, eye, and mental health status.

Discover the health benefits of passionflower. It has many medicinal properties from calming the mind to improving gut health.