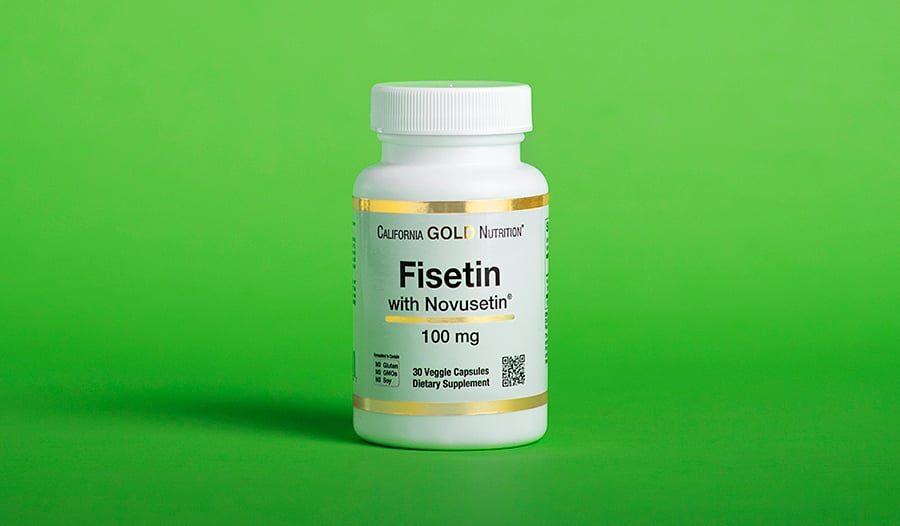 There is no shortage of natural compounds that impact brain health. After all, the brain is the most active tissue in the body.

One of the most exciting compounds in nature is flavonoids, a class of compounds referred to as “nature’s biological response modifiers.” These compounds are primarily responsible for the colors found in many fruit, flowers, and other plants. They are critical to the health of plants, and they appear to be essential to human health as well.

Over 8,000 flavonoids have been identified. And although they share many essential functions as increasing antioxidant mechanisms, fighting aging and cellular degeneration, and exerting beneficial effects on the cardiovascular system, there are subtle differences in how different flavonoids work in the human body.

Fisetin is one of the most deeply investigated flavonoids.1 Technically speaking, fisetin is a flavonol molecule similar to those found in dark chocolate and cacao. Fisetin is found in tiny amounts in particular fruits and vegetables.

Consistent with other flavonoids sources like quercetin, resveratrol, and grape seed extract, fisetin exerts a myriad of beneficial effects. The focus of this article will be on fisetin’s unique effects on brain health, cognition, and memory.

Much of the research on fisetin on brain health has been conducted at the prestigious Salk Institute for Biological Studies in San Diego and has focused on fisetin as a “nootropic” and “neurotrophic factor.” The term nootropic is a substance that can enhance memory and brain function. Several other natural compounds that exert this effect include lion’s mane extract, PQQ with CoQ10, resveratrol, and curcumin.

What sets fisetin apart is its action as a neurotrophic factor. These sorts of compounds support the survival, differentiation, and functional maintenance of brain cells. In other words, fisetin is a bit different in that in addition to helping brain cells function better; as a neurotrophic, fisetin plays a role in improving what is known as “brain plasticity.”

Of all of the flavonoids tested in the full range of animal models for age-related brain changes, only fisetin and a related minor flavonol were shown to be effective.2

How Does Fisetin Work?

Fisetin can cross the blood-brain barrier to work through a very complex set of mechanisms to produce its effects as a nootropic and neurotrophic agent. And, again, fisetin’s actions are a bit different than other compounds, but it does share many actions with other flavonoids. For example, fisetin shares some anti-aging properties with resveratrol. It also is an effective senolytic agent, which means that it helps the body and brain get rid of old cells to produce a “pruning” effect in allowing healthier cells to flourish or replace the old cells. Fisetin has roughly twice the effect in this capacity as quercetin.

Like other flavonoids, fisetin also increases glutathione production, the key antioxidant and detoxifying agent in our cells. Increasing glutathione levels in the brain produce all sorts of benefits as the brain is better able to protect itself from damage and has higher cellular energy levels.2

One of the critical actions of fisetin is activating what is known as the ERK pathway.3 ERK stands for “extracellular signal-regulated kinases.” Extracellular means outside the cell, and kinases refer to a class of enzymes. The ERK is when something outside the cell signals the inside of the cell to activate the kinase enzymes.

Fisetin helps brain cells start to produce proteins that are critical to brain cell structure and function, especially at the communication junctions known as synapses between the cells. It also reduces various markers of inflammation within the synaptic connections.

By activating the ERK pathway, fisetin can improve brain cell structure and function. What this translates to is improved cognition and memory. This effect has repeatedly been demonstrated in pre-clinical studies.2,3

What is the Dosage Recommendation for Fisetin?

There are only two human studies with fisetin, and both used a daily dosage of 100 mg.5,6 This dosage was calculated from a considerable amount of animal data showing efficacy and safety that allows for calculating human dosage based on United States Food and Drug Administration guidelines.

Mastic gum is made from the resin of mastic trees found on the Greek island of Chios. It is known to help with digestion, high blood sugar, and IBS.

Discover the health benefits of passionflower. It has many medicinal properties from calming the mind to improving gut health.

Discover the health benefits of beta-carotene and how it can improve your lung, skin, immune, eye, and mental health status.