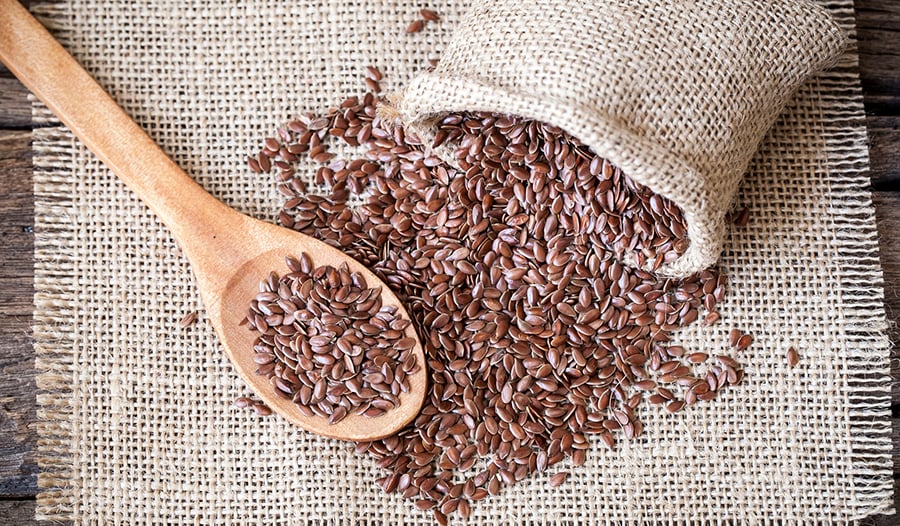 One of the most healthful additions to a heart-healthy diet is ground flaxseeds. This wondrous little seed has played an important part in human history for over 5,000 years. Native to the Mediterranean, flax has been used not only as a food but also for its fibers, which can be woven into linen cloth. Now, most valued for its ability to reduce the risk of breast and prostate cancer, a new study from the Canadian Center for Agri-Food Research highlights another important effect in promoting cardiovascular health.

The major health benefit of flaxseeds has focused on the rich content of oil and the fiber components known as lignans. Flaxseed oil contains nearly twice the level of omega-3 fatty acids as fish oils – although it is the smaller-chain alpha-linolenic acid rather than the longer-chain fats like EPA and DHA found in fish oils.

Flaxseeds are the most abundant source of lignans. These components are fiber compounds that can bind to estrogen receptors and interfere with the cancer-promoting effects of estrogen on breast and prostate tissue. Lignans also increase the production of a compound known as sex hormone-binding globulin or SHBG. This protein regulates estrogen levels by helping to escort excess estrogen from the body. Ground flaxseeds, as well as purified lignan dietary supplements (300 mg per day), have also been shown to lower blood LDL cholesterol levels. Ground flaxseeds consumption can lower blood pressure. In a double-blind study conducted at the St. Boniface Hospital Research Centre in Winnipeg, Canada, 30 g of ground flaxseed consumed daily produced an average reduction of 15 mm Hg in systolic blood pressure and 7 mm Hg in diastolic blood pressure in hypertensive patients.

The purpose of the study was to evaluate the effects of dietary flaxseed on plasma cholesterol in a patient population with clinically significant peripheral artery disease (PAD) including many who were taking statins to lower LDL cholesterol levels. Patients (110) consumed daily foods that contained either 30 g of milled flaxseed or 30 g of whole wheat for one year. Plasma lipids were measured at 0, 1, 6, and 12 months.

Dietary flaxseed in these PAD patients resulted in a 15% reduction in circulating LDL cholesterol as early as 1 month into the trial. Results at one year, however, did not reach statistical significance in all patients. Interestingly, in the subgroup of patients taking flaxseed and statins (n = 36), LDL-cholesterol concentrations were lowered by 8.5% compared with baseline after 12 months. This result indicates that flaxseed consumption provides additional LDL-cholesterol-lowering capabilities when used in conjunction with statins.

The takeaway message from the study is that a simple dietary addition can produce significant health benefits. Most of the beneficial research has focused on the use of ground flaxseeds, as this form allows for the beneficial compounds to be more easily liberated compared to consuming the whole seeds. When buying ground flaxseeds it is highly recommended to purchase ground flaxseeds in a vacuum-sealed package or has been refrigerated since once flaxseeds are ground; they are much more prone to oxidation and spoilage. Here are some quick serving ideas:

Blueberries are among the most important foods for good health. The diverse and wondrous health benefits of blueberries are primarily due to their high content of specialized pigments known as anthocyanins.

Starting a Heart-Healthy Diet—Here's What You Need to Know

Start a heart-healthy diet the right way. Enjoy these heart-healthy foods, supplements, and lifestyle recommendations to reduce your risk of heart disease.

Why Coconut Products are Good for the Paleo Diet

The Paleo Diet has become very popular recently for several good reasons. The addition of coconut items by itself or in recipes can add to the effectiveness of this type of diet.