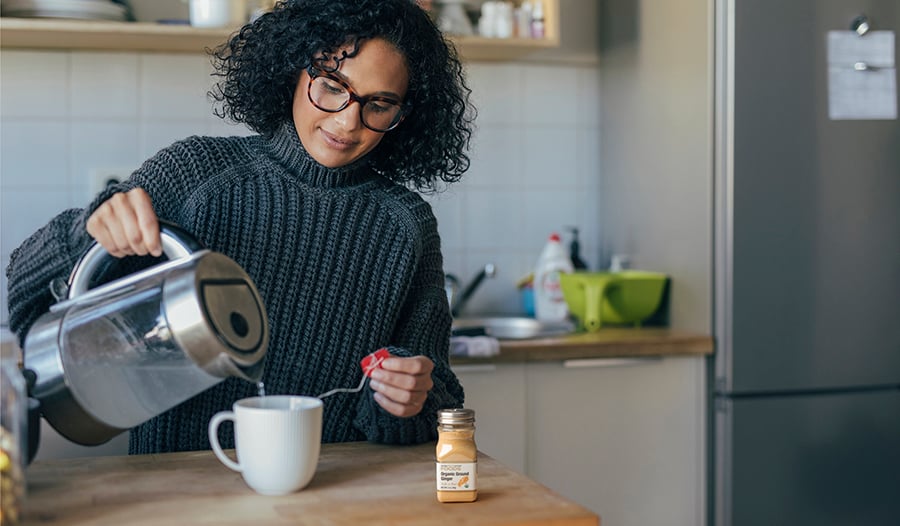 What Causes an Upset Stomach?

The most common feeling when thinking of an upset stomach is nausea. Nausea can sometimes precede vomiting and act as a sign that vomiting may occur. Although these feelings/actions are not pleasant, nausea and vomiting both function as a protective measure for our body, with the ultimate goal of removing ingested toxins or something the body deems “bad for us.”

Nausea is extremely common; in studies, more than 50% of adults reported at least one episode over the last 12 months. Women report nausea three times more than men do. According to research, each individual has a different threshold that can change day to day. In other words, some people can take on a lot before they feel nauseous, where other people are triggered very easily.

Many parts of the body are involved in the process of becoming nauseous: the nervous system, specifically the part that is automatic, also known as our autonomic nervous system, the stomach itself, and our endocrine or hormone control system. The nervous system will respond to something that is not good for us.

For example, if we accidentally eat a piece of moldy fruit, the nervous system will tell the mouth to start producing saliva. It will stop the digestive process and perhaps make us pale or increase our heartbeat. All of these steps prepare the body to remove the moldy fruit so it doesn’t harm us. Interestingly, our emotional state can also trigger the nervous system. Hormones get produced from our thoughts. For example, if we see someone vomit on TV, this can make us feel like we want to vomit, too.

Other causes of nausea include hormones in pregnancy. A specific hormone called vasopressin controls the levels of fluids in our body. This hormone often increases with nausea and/or vomiting. “Sea” or motion sickness is another cause of nausea, and it comes from the disconnect between a sensing system in our ears and our brain. Often one of these parts of the body is unaware that we are moving, and nausea/vomiting is a sign of confusion within the body. Imagine if your foot started to move, but you were unaware of it!

Additionally, many nerves serve to move the food within the digestive system. These nerves signal to the digestive system that the muscles need to squeeze. Sometimes in motion sickness or pregnancy, these signals happen at the wrong time, causing gastric dysrhythmias. This poorly timed contraction of the stomach can cause nausea or vomiting.

You can manage nausea in many ways, including pharmaceuticals and avoidance of triggers. For example, medications like antihistamines can manage motion sickness depending on the trigger, while anti-biopics can work against infections. Avoiding spoiled food or traveling on a boat may be additional ways to prevent nausea if these are your triggers. Additionally, you can manage nausea naturally, like with ginger.

Ginger, or Zingiber officinale, is one of the most commonly used condiments in the world. This spice is in the same plant family as turmeric. The rhizome or root of the ginger plant stores ketones like gingerol, causing various physiological effects on the body.

The use of ginger dates back to 5,000 years ago in traditional Indian and Chinese “ginger tonic” preparations with notable usage in the Roman Empire and England. Ginger has been used traditionally for thousands of years to manage symptoms of migraines, colds, arthritis, high blood pressure, and nausea.

Forms of usable ginger include fresh, dried, powdered, candied, and crystallized. The longer you wait to harvest it, the more pungent or “gingery” the aroma will be. For use in powdered or oil form, the most common form for supplements, it’s suggested that harvest occurs at nine months to maximize the concentration of gingerol.

Various studies have confirmed that ginger and its metabolites (what the body breaks ginger into) tend to concentrate in the digestive system. So it makes sense that ginger has a positive effect on the stomach. In addition to its ability to reduce nausea, it also has antioxidant properties. This plant can also support healthy cell division and levels of inflammation.

Why Is Ginger Good for the Stomach?

The most popular use of ginger is to combat symptoms of nausea and prevent vomiting. Some studies have shown that this herbal remedy is just as effective as over-the-counter anti-nausea medicines. Once ingested into the body, it breaks down and expels gas that builds up in the intestines. That may be one of the reasons for an upset stomach.

Additionally, preclinical studies in animals have shown that ginger can prevent stomach irritation from stomach acid and alcohol. A compound called gingesulfonic acid, found in ginger, is responsible for this protective property.

Other studies have shown that ginger can stimulate gastric (stomach) emptying and contractions of muscles in the digestive system. This action can alleviate a “too full” feeling.

Ginger can prevent motion or “sea” sickness, with some studies showing that it is more effective than over-the-counter motion sickness drugs. Ginger inhibits serotonin receptors and has a direct effect on the gastrointestinal system and the central nervous system. Ginger has also prevented nausea and vomiting seen during pregnancy.

How Can I Incorporate Ginger into My Routine?

Ginger is available in many different forms, so finding a delivery system to reap the benefits of this powerful herb is relatively easy.

Essential oils are natural derivatives from aromatic plants. These compounds date back to over 1,500 years ago. Essential oil composition depends on a variety of factors, including the extraction method and botanical source. Ginger essential oil can work in various ways, including as an aromatherapy agent, which relies on the smells or aromas of essential oils as a supportive therapy.

Ginger capsules are likely the most commonly used form of ginger. Encapsulation provides an increase in the bioavailability of the active ginger. A capsule coating provides controlled release to a specific part of the digestive system.

Studies looking at the compatibility and effectiveness of encapsulated Ginger to pregnant women have been promising. One study looked at women 13-15 weeks into their pregnancies and suffered from nausea and vomiting. Ginger was effective in reducing the number of times women vomited and the severity of their nausea.

Ginger tea has been used in traditional Chinese medicine to manage stomach pain as well as a variety of symptoms, including nausea and vomiting. Often many symptoms are rooted in an increased inflammatory response in the body. This natural protective phenomenon can accidentally damage and disrupt normal physiological processes in the body, especially in the digestive tract.

Ginger tea extracts have been shown in studies to downregulate inflammatory responses and chemicals called cytokines in the body. This leads to a better functioning body and gastrointestinal system.

A more recent delivery system for ginger comes in the form of a gummy or chew. These products provide a longer-lasting warm pungent ginger taste. Studies have shown that this delivery form is effective in managing symptoms of motion sickness.

Although stomach upset is very common, thankfully, there can be a natural help with ginger use.

Previous Article
Have You Heard of Passionflower? 5 Surprising Health Benefits
Next Article
What Are Seasonal Blues? + 11 Ways to Mitigate It

Have an Upset Stomach? 5 Natural Ways That May Provide Relief

Having an upset stomach can be debilitating, but there are ways to find natural relief. Ginger, peppermint, fennel, digestive enzymes, and avoiding food triggers can help.

We have all felt symptoms of dyspepsia, an uncomfortable feeling in the stomach, at one time or another. It may be associated with indigestion, a sour stomach, acid reflux, or GERD—also known gastroesophageal reflux, which causes an acid-like, burning sensation in the stomach or, perhaps, throat. Dyspepsia can also be caused by gastritis, an inflammation of the stomach. The bacteria Helicobacter pylori (h. pylori) is believed to be the main risk factor for developing stomach ulcers and even stomach cancer, is frequently present in many who suffer from gastritis.

A food allergy or food intolerance occurs when there is an adverse reaction to the ingestion of a food. The distinction between the two terms is that in a classic food allergy the immune system is involved to produce a true allergic reaction to produce more severe symptoms while in a food intolerance symptoms are generally less serious and often limited to digestive problems.