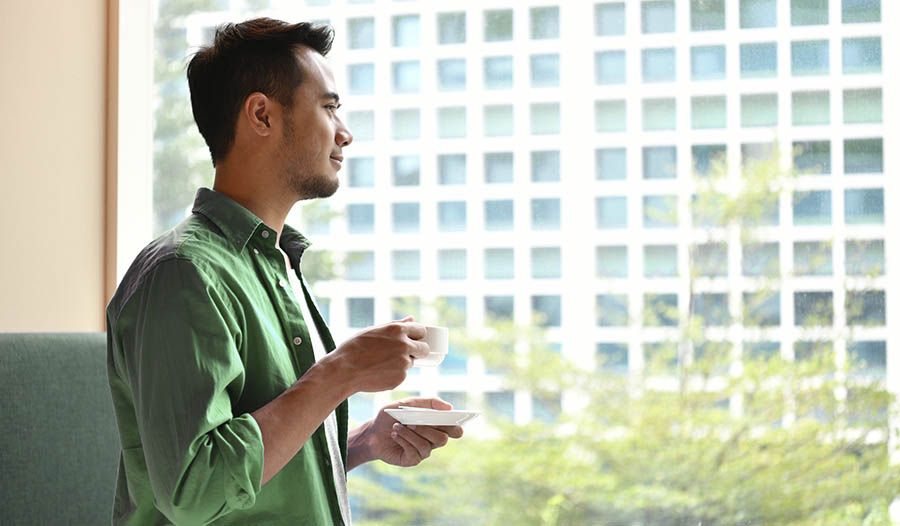 Many types of tea are made from the leaves of the tea plant or Camellia sinensis. The differences lie in the way the leaves are processed after being harvested. For example, people making green tea will pluck leaves that have just started to wilt and then immediately heat them to keep them from fermenting. They will then roll and shape the leaves. By contrast, someone making black tea will roll the leaves before heating them.

Herbal teas, on the other hand, are made from plants other than Camellia sinensis. No matter how they’re made, many types of tea provide health benefits. Consider the following examples.

Black tea contains about 40 milligrams of caffeine per cup, making it one of the most highly caffeinated types. In addition to caffeine, it contains the stimulants xanthine and guanine. It owes its astringent flavor to compounds called tannins that have anti-viral effects and could thus fight diseases like hepatitis, influenza and dysentery. They can also aid the digestive tract. Tannins and some antioxidants can kill some of the bacteria that cause tooth decay and bad breath. Black tea contains theaflavins and thearubigins, both of which are antioxidants that some researchers believe could reduce cholesterol levels. It is also a good source of vitamins and minerals like zinc, potassium, magnesium and Vitamins E, C and B2. According to some experts, drinking three cups every day may reduce the risk of stroke by 21 percent.

Green tea contains plenty of catechins, another kind of antioxidant. Researchers believe that one catechin, EGCG, may help protect people from both heart disease and cancer. According to the American Cancer Society, EGCG causes some cancer cells to die as if they were normal cells while cancer cells not exposed to EGCG continue to grow and metastasize. One study demonstrated that drinking a single cup every day could reduce the chances of developing heart disease by 10 percent. Since green tea also contains caffeine, it is a stimulant that boosts the metabolism.

Chamomile is an herbal tea made from the flowers of the chamomile plant, and people have used it as a remedy for centuries. It is probably best known as a treatment for sleep; many people drink chamomile in order to get to sleep. Scientists have found that it also contains antioxidants that may inhibit the growth of cancer cells. Those antioxidants may protect people with diabetes from some of the side effects of the disease like kidney damage, nerve damage and vision loss. A 2008 study with rats found that chamomile prevents such side effects from developing by limiting an increase in blood sugar. Chamomile can also reduce inflammation and thus decrease the risk of conditions like arthritis, gastrointestinal pain, hemorrhoids and even depression.

White tea is a minimally processed variety of Camellia sinensis. People harvest the leaves before they have fully opened. At this stage, the buds are covered with fine white hairs, which is why the resultant beverage is called white. The harvesters pick the leaves and buds by hand and then quickly dry them before they can oxidize.

Like green tea, white tea contains a lot of catechins that are beneficial in helping fight cardiovascular disease and cancer.

Kombucha is fermented black or green tea. The fermentation process makes probiotic bacteria that provide many health benefits. They could improve digestion, reduce inflammation and even promote weight loss. As researchers have found a link between inflammation and depression, kombucha’s anti-inflammatory effects mean that it may relieve some depressive symptoms. Kombucha also contains a lot of antioxidants and thus provides many of the same health benefits of green tea, such as a reduced risk of cancer and cardiovascular disease. The fermentation process used to make kombucha produces acetic acid, which is also found in vinegar. Acetic acid can kill bacteria and thus prevent infection.

Oolong is another fermented tea. It differs from kombucha in that the fermentation process stops earlier when the leaves start to turn color. Oolong contains many vitamins and minerals, including calcium, copper, manganese, potassium, selenium and Vitamins A, B, C, E and K. It contains the stimulants caffeine, theobromine and theophylline.

Oolong is also a good source of niacin and antioxidants that may prevent tooth decay. It activates enzymes that help burn fat. In addition, it is rich in antioxidants that help prevent osteoporosis and make bones stronger. Oolong could also help control diabetes and relieve some skin conditions like eczema and atopic dermatitis.

Rooibos is an herbal tea made from the leaves of the rooibos plant, a bush found in Africa. It is known for its red color, good taste and many health benefits. Unlike many teas, rooibos does not contain oxalic acid, so it is safe for patients with kidney stones. Rooibos also contains no caffeine and may thus help people with insomnia. Drinking a cup of rooibos before bed could aid sleep.

Rooibos contains many minerals like zinc, magnesium, manganese, copper and calcium. Some of these minerals strengthen bones and teeth and may thus prevent osteoporosis and arthritis. Rooibos also has a lot of antioxidants that are anti-inflammatory to help prevent heart disease and cancer. Two of the antioxidants in rooibos, nothofagin and aspalathin, also help boost the immune system.

Echinacea is an herbal tea made from the flowers and leaves of the plant of the same name. Echinacea is actually a plant genus in the daisy family, and it has nine species. E. purpurea, E. pallida and E. augustifolia are used as remedies for various conditions. Native Americans have used Echinacea for over 500 years.

Echinacea contains many antioxidants, vitamins and minerals. It is often used as a treatment for colds because it has a lot of Vitamin C. One study demonstrated that taking Echinacea as a lozenge or tea prevented infections. Vitamin C also helps makes collagen so it may help prevent skin problems like wrinkles and age spots.

Rosehip is an herbal tea made from dried or crushed rose hips or the rose plant’s fruit. It is a good source of Vitamin C as well as many antioxidants like catechins and polyphenols. The flavonoids and carotenoids in rose hip have analgesic qualities, so may help relieve pain. Vitamin C in rosehip can strengthen the immune system by helping to increase the white cell blood count.

Use hibiscus tea leaves for a frozen treat!

A hot cup or a tall, cooling glass of tea can help one relax. Tea can help with more than just relaxation, though; some teas can also benefit an active lifestyle in many ways.

You may be surprised to hear the many benefits of chai tea!