L-Theanine: The Nutrient in Green Tea That Has Powerful Health Benefits 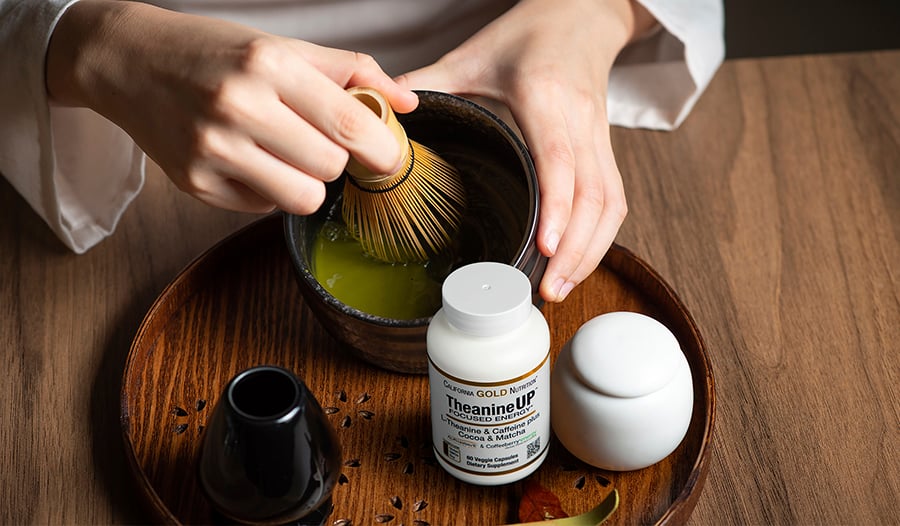 L-theanine (Camellia sinensis), a unique amino acid found almost exclusively in tea plants. As a dietary supplement, it is a popular natural approach to relieve stress and promote calm but with increased mental energy.1

Another critical benefit of L-theanine is that it is fast-acting. Generally, the effects are felt within the first 30 minutes and last 8 to 12 hours. L-theanine is generally recognized as safe (GRAS), with no adverse effects having been reported.1-3

Any discussion on the health benefits of green tea would be incomplete if it did not highlight L-theanine. The tea plant uses L-theanine to manufacture its polyphenols known as catechins during the process of photosynthesis. Theanine is also the compound responsible for the characteristic taste and aroma of green tea.

As for green tea sources, matcha has a high amount of theanine as its cultivation involves shading the tea plant for the last three weeks before harvesting. The result is less photosynthesis occurs so that more theanine is left on the leaves giving matcha its characteristic sweetness and flavor. Shading also results in the tips of the plant concentrating chlorophyll giving matcha a brighter green color.

While traditional green tea may have theanine content as low as 5 mg per cup, shade-grown green tea, like matcha, may have as much as nine times this amount per cup, or about 45 mg, but most often matcha contains 25 to 30 mg per cup. As for caffeine content, matcha comes in at a modest 30 mg per cup. So, there is generally an equal amount of L-theanine and caffeine in matcha.

Human clinical studies have confirmed many of the unique effects of L-theanine as it has been shown to reduce the adverse side effects of caffeine, such as anxiety and irritability. It has also been shown to reduce stress feelings, improve sleep quality, diminish the symptoms of premenstrual syndrome, heighten mental acuity, and provide some benefits in attention deficit disorder with hyperactivity.

L-theanine exerts many exciting effects, primarily on brain chemistry. The easiest way to look at theanine is as an "anti-caffeine" molecule, but that is somewhat limiting. Caffeine is a stimulant, and theanine buffers some of the effects of caffeine in the brain. It is incorrect to think of theanine as a "sedative." L-theanine is anything but that as it stimulates brain energy, just much different from caffeine.1-3

In animal models, L-theanine has been shown to increase brain levels of many different brain chemicals, especially neurotransmitters that carry signals from one brain cell to another. It improves brain function, learning, and memory in these studies. That is probably why forms of green tea rich in theanine, like matcha, were so valued as an aid to meditation and revered in green tea ceremonies.

One of the critical outcomes of theanine's complex actions in the brain is to increase the production of α-brain waves.4 These brain waves are associated with feelings of calmness and focus. During meditation, α-brain waves are abundant. It is interesting to note that matcha, the form of green tea most valued by ancient Japanese monks for their tea ceremony, is the richest source of theanine with only a modest caffeine content. Theanine accentuates the meditative state by promoting greater mental focus and alertness. In addition to boosting α-brain waves, theanine also lowers β-waves. This brain wave pattern is associated with nervousness, scattered thoughts, and hyperactivity.

The Anti-Stress Benefits of L-Theanine

L-theanine can facilitate positive changes in brain chemistry, promote alpha brain waves, and reduce beta waves, resulting in reduced feelings of stress, anxiety, irritability, and anxiousness caused by caffeine.1-3 That said, when L-theanine is used with caffeine, it has been shown to enhance cognitive skills and improve attention span, the ability to process visual information, and increased accuracy when switching from one task to another. All positive effects.4-6

The primary use of L-theanine is in reducing feelings of stress and anxiety without causing sleepiness. Again, L-theanine helps promote a state of calm, attentive wakefulness.

These actions of L-theanine imply that it might be helpful in attention deficit hyperactivity disorder (ADHD). In conjunction with the University of British Columbia, the Canadian Center for Functional Medicine conducted a double-blind, placebo-controlled study in boys ages 8-12 diagnosed with ADHD to take 200 mg of L-theanine twice daily as a chewable tablet.7 The primary outcome from the study showed that L-theanine worked safely and effectively to improve the quality of their sleep, helping them sleep more soundly, which is a huge benefit to children with ADHD. Disturbed sleep is a significant factor in childhood ADHD.

Other research also shows L-theanine can improve the quality of sleep.1,2 It is not a sedative (sleep-promoting agent) per se, but it does promote sleep by promoting a more relaxed state of mind.

L-theanine may have additional benefits in ADHD. In a study published in 2020, a very detailed analysis was conducted looking at a single dosage of L-theanine (2.5 mg per kg body weight), caffeine (2 mg per kg body weight), and their combination vs. placebo on brain function in boys (8-15 years old) with ADHD. The study also included functional magnetic resonance imaging (fMRI) to gauge their effects on brain networking. The complex results indicated that the L-Theanine-caffeine combination might be a potential therapeutic option for ADHD-associated impairments in sustained attention, inhibitory control, and overall cognitive performance.8

The researchers suggested the morning administration of this combination of L-theanine and caffeine "may prove to be more useful in other aspects of ADHD such as poor attention and hyperactivity." 8

Several other studies showed the combination of L-theanine and caffeine (e.g., 97 mg and 40 mg, respectively) could significantly improve specific mental tasks and alertness in adults.4-6

L-theanine on its own improves brain function.1,2 This was clearly shown in a recent 2021 double-blind study with a single 100 mg dosage of L-theanine and a daily dosage of 100 mg for 12 weeks significantly improved brain function. The subjects were men and women between the ages of 50 and 69 years old.9 A battery of tests known as Cognitrax was used to assess cognitive function. Evaluations were performed before the intervention, after a single dose of L-theanine, and after 12 weeks of regular intake. Results showed L-theanine reduced the reaction time to attention tasks and it increased the number of correct answers, and decreased the number of omission errors in working memory tasks. These results are due to L-theanine redistributing attention resources to improve mental focus efficiently. The researchers concluded that L-theanine might contribute to enhancing attention, thus enhancing working memory and executive functions.

Earlier studies showed L-theanine as a sole agent improves certain mental functions with chronic use. Still, it is hard to separate this effect from direct versus indirect by reducing the adverse impact on cognitive performance caused by stress or poor sleep. For example, in one study, L-theanine (200 mg/day) or placebo tablets were given to subjects for four weeks.10 Assessments included those for depression, anxiety, sleep quality, along with a battery of mental tests. Results showed significant improvements in sleep and mood and improved cognitive functions, verbal fluency, and executive function scores. The findings indicated that the improvements in cognitive function were closely tied to the advancements in sleep and mood.

L-theanine is absorbed and delivered to the brain across the blood-brain barrier, promoting relaxation with greater mental focus and clarity. It enables this desired state by increasing the brain's levels of crucial neurotransmitters like dopamine, serotonin, and gamma-aminobutyric acid (GABA) while at the same time antagonizing the effect of excitatory neurotransmitter glutamate.1,2

One of the critical net effects noted with L-theanine ingestion is that it enhances alpha brain waves associated with a state of "wakeful relaxation" while simultaneously reducing the beta brain waves associated with nervousness, scattered thoughts, and hyperactivity. The brain wave pattern promoted by L-theanine is related to the state of mind during meditation, relaxed mental focus, and creativity. Again, this effect explains the use of match in the tea ceremony of Japan by monks to enhance their meditation.4

There is another effect of L-theanine that aids in fighting stress, reducing cortisol levels. This effect is essential as elevated cortisol and related stress hormones can interfere with memory and learning.3

What L-Theanine Does in the Body

Based on the results of numerous clinical studies, it has been established that L-theanine is effective in the range of 100 to 200 mg per day. Although L-theanine is without any known adverse drug interaction it is recommended to take no more than 600 mg within 6 hours and no more than 1,200 mg within 24 hours.

At doses of around 100 to 200 mg, L-theanine does not act as a sedative but significantly improves sleep quality. It is also an excellent synergist between melatonin and 5-HTP (5-hydroxytryptophan) in promoting sleep.

L-theanine is safe and without side effects based on numerous safety studies and clinical trials.1,2 Beyond that, L-theanine has been consumed in beverages, foods, and supplements since 1994 with no indication of adverse reactions or contraindications. The L-theanine, known as Suntheanine, received confirmation from The United States Food and Drug Administration in 2007 as a Generally Recognized as Safe (GRAS) ingredient for its use in food and beverages and is available as a dietary supplement.

There are no known drug interactions with L-theanine. L-theanine may help the action of anti-anxiety and antipsychotic medications. For example, a 2011 study published in the Journal of Clinical Psychiatry clearly showed the benefit of L-theanine in improving the effectiveness of psychiatric drugs. In the study, 60 patients with schizophrenia added 400 mg per day of L-theanine to their ongoing antipsychotic treatment for over 2.5 years.11 Compared with placebo, L-theanine augmentation was associated with a significant reduction of anxiety and mental symptoms. L-theanine was found to be safe, and there were no adverse drug reactions.

Zinc and L-Carnosine: Two Powerful Ingredients That, When Combined, May Benefit Gut Health

Although zinc and L-carnosine can be taken individually, when combined, the complex has unique effects that may support gastrointestinal function.