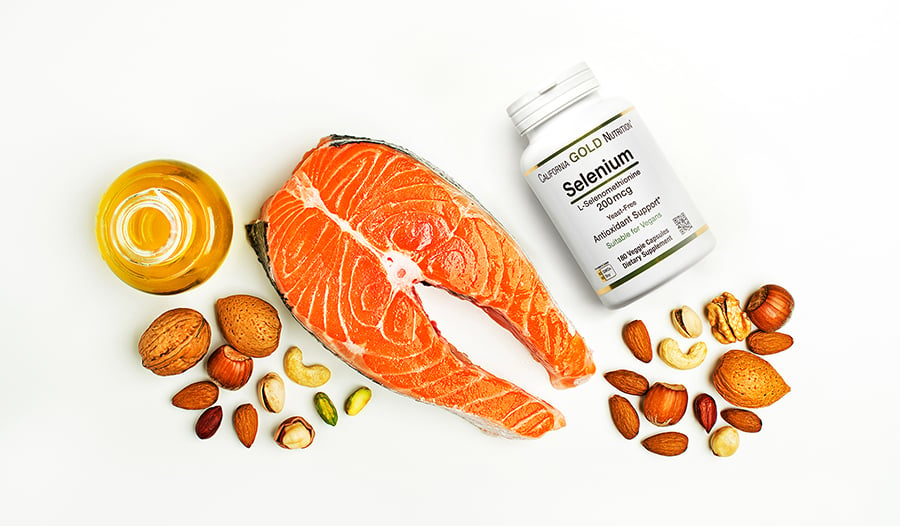 Discovered by a Swedish chemist in 1817, selenium became an area of scientific interest during the 1950s and is now recognized as an essential trace element to the human body. Trace elements are minerals present in small amounts in living tissues with various important functions. There are a total of 14 known trace elements, including iron, zinc, iodine, copper, manganese, aluminum, lead, and fluoride.

Selenium can be obtained only through diet or supplementation intake. Acting as a powerful antioxidant, it benefits the human body by protecting against harmful free radicals, thus providing protective immune functions.

The human body absorbs the mineral easiest when in the presence of fat-soluble vitamins such as A, D, and E.

‌‌‌‌Dietary Sources That Are Rich Of Selenium

Other foods such as cereals, dairy grains, and eggs also contain adequate amounts of selenium.

The best intake of selenium is through a balanced diet. However, it can be appropriate to supplement with a selenium vitamin when necessary levels cannot be met via a proper diet. While supplemental selenium comes in both organic or non-organic forms, research has shown that the organic form can be more readily absorbed.

When one does not consume adequate amounts of selenium, the following signs and symptoms may be present.

Those with impaired digestion are at risk for malabsorption and an increased risk for deficiency.

Recommended intake depends on a person’s age and sex, but generally, the daily allowance for an adult is 55 mcg daily and for a child is 20 mcg daily.  While many experts feel this is too low and is simply the minimal — not optimal — amount, side effects can occur when selenium is taken in excess.

When selenium is taken in multivitamins or in a supplement form as directed, it is safe. Taking more than what is recommended on a supplement label, however, may cause side effects to occur, including anemia, hair loss, and bone stiffness. Other common symptoms of toxicity include metallic taste in the mouth, diarrhea, nausea, mental status changes, and peripheral neuropathy.

A strong and healthy immune system is integral to fighting any type of infection caused by bacteria or viruses. Linked to selenium are more than 30 selenoproteins, which are responsible for the powerful antioxidant defense mechanism, an important function in the immune response that protects our bodies.

Antioxidants help prevent cell damage caused by an excess of free radicals and other types of oxidative stress. When oxidative stress can be kept at a minimum, there are fewer healthy cells being damaged, reducing the risk for illness or infection.

In addition, selenium has been found to have anti-inflammatory, antiviral, and antibacterial properties that strongly influence inflammation and immune response. There are various studies that have demonstrated the association between selenium and viral infections and thyroid, which are discussed below.

Selenium deficiency has been directly linked with an increased risk of viral infections. Decreased levels of selenium in the body may result in increased oxidative stress, leading to increased inflammation. The most compelling data regarding the detrimental effects of selenium deficiency comes from an area of China where the soil contains low levels of selenium. A large number of women and children were found to have Keshan disease, a type of cardiomyopathy caused by a virus that can be prevented by supplementing individuals with selenium tablets. This is concerning for malnourished groups, such as children and the elderly, who may be deficient in selenium and possibly more susceptible to infections.

A 2013 study in the Journal of Nutrition looked closely at the correlation between selenium and two viruses, coxsackievirus and influenza. In the lab, mice were fed either a deficient or adequate selenium diet for four weeks and then inoculated with coxsackievirus B3 or an influenza strain. It was found that the selenium-deficient diet group had a fivefold increase of developing myocarditis, a dangerous heart infection. The selenium-deficient group of mice infected with influenza virus was found to have severe lung inflammation.

An additional study looked at the protective factors of selenium supplementation in mice against influenza and found that mice who received supplementation had higher survival rates than those who were deficient. This can be once again be attributed to selenium’s beneficial ability to clear viruses. I could find no studies in humans.

A 2004 study in the American Journal of Clinical Nutrition evaluated selenium and the poliovirus. In the study, a group of adults with low blood selenium received either a placebo, 50 mcg, or 100 mcg of selenium supplementation daily for 15 weeks.

After 6 weeks, all groups received the oral polio vaccine. Their blood was then analyzed. The group with the 50 mcg and 100 mcg supplementation had increased blood selenium levels as expected, and they also showed a better immune response, which led to a rapid clearance of the poliovirus.

HIV is another RNA viral infection that has been observed to affect selenium levels. Among HIV-infected subjects, low selenium levels have been directly linked with low CD4+ T cell counts, worsening disease progression, and higher mortality. A double-blind, randomized placebo-controlled trial from 2007 took a group of subjects who received either a daily high dose of selenium supplementation at 200mcg/d or placebo capsule and assessed them at the nine-month and 18-month interval. The study concluded that at the nine-month interval, those taking the selenium supplementation were found to have an elevated serum selenium level, and the progression of HIV and CD4+ cell count were both suppressed. Furthermore, those receiving the supplementation also had decreased hospital admissions, which is evidence that supplementing may be a beneficial add-on to those undergoing treatment of HIV.

Due to selenium’s antioxidant properties, research has shown that selenium plays a key role in the function of the thyroid gland and in the production of thyroid hormone. In fact, in adults, the thyroid is the organ with the highest amount of selenium per gram of tissue. It has been found that low levels of selenium contribute to autoimmune thyroid diseases, including Hashimoto's thyroiditis, hypothyroidism, thyroid cancer, and also enlarged thyroid.

One popular study in 2002 looked at a group of patients with autoimmune thyroid disease.  Some received a placebo while others received 200 mcg of selenium supplementation for three months. The selenium group had reduced thyroid peroxidase antibodies from 100 percent to 63.6 percent, and ultrasounds showed less inflammation of the thyroid gland. This study provided strong evidence that selenium has a significant impact on the health of the thyroid gland.

A 2016 paper looked at the literature of 16 different trials that measured serum thyroid peroxidase antibodies and thyroglobulin antibodies at three, six, and 12-month intervals of patients with Hashimoto’s thyroid disease. Of the two groups in the study, one was treated with  a thyroid medication called levothyroxine and selenium. The second group only received the selenium. The results suggested that the group treated with both the medicine and selenium showed a decrease of antibodies at three months through 12 months. The group that received the selenium supplementation alone saw a reduction in antibodies for only three months. This is evidence that selenium supplementation overall helps optimize thyroid health.

Pregnant women who are positive for thyroid peroxidase antibodies have a high risk of developing thyroid dysfunction or hypothyroidism after giving birth. The Journal of Clinical Endocrinology and Metabolism reports a study from 2007 that found selenium supplementation to reduce the risk of postpartum thyroid problems. In the trial, 151 women either received 200 mcg of selenium or placebo around their third month of pregnancy. Those who took selenium were 20 percent less likely to develop thyroid abnormalities.

Cardiovascular disease is one of the biggest killers of people worldwide. Anything that can be done to help reduce the burden even minutely can ultimately have a big effect. For example, as previously mentioned, selenium deficiency plays a significant role in the progression of Keshan’s disease, a type of rare cardiomyopathy. However, what interests researchers now is what other role does selenium play, if any, in other types of cardiovascular disease.

A 2006 meta-analyses looked at data from 25 different studies evaluating selenium supplementation and its association with heart disease. The results showed that a serum selenium increase of 50 percent was directly linked with a 24-percent reduced risk of coronary events, such as heart attacks. However, the study also pointed out that the validity was uncertain because the studies were observational. Further, in some cases selenium supplementation was not measured independently, it was given alongside other minerals.

A 2006 study by the American Journal of Epidemiology looked at 1004 participants over an eight-year period. Half received 200 mcg selenium supplementation and the other half a placebo. The scientists concluded that there were no significant findings suggesting preventative benefits by supplementation. A later 2009 study concluded that those with lower blood levels of selenium were more likely to die from heart disease.

Selenium is an essential mineral with powerful antioxidant properties that has been found to absolutely have immune protective benefits against viral infections. Research also supports selenium’s beneficial role in reducing thyroid hormone levels in autoimmune thyroid diseases as well as in the prevention of developing thyroiditis postpartum. More research needs to be conducted to be able to confidently say that selenium is useful against cancer or cardiovascular diseases.

Previous Article
Can A Detox Benefit The Immune System? Here's What A Doctor Said
Next Article
A Dietitian Predicts The 15 Most Popular Superfoods of 2021

A Quick Guide to Selenium

The trace mineral selenium functions primarily as a component of the antioxidant enzyme glutathione peroxidase which works with vitamin E in preventing free radical damage to cell membranes.

The terms “antioxidants” and “free radicals” have become pretty common in recent years. Loosely defined, a free radical is a molecule that can bind to and damage a part of the body.

9 Natural Supplements for Detoxing the Body

Toxins like pesticides or preservatives can accumulate in the body and cause health issues. Try nutrition tips and supplements for cleansing the body of toxins.