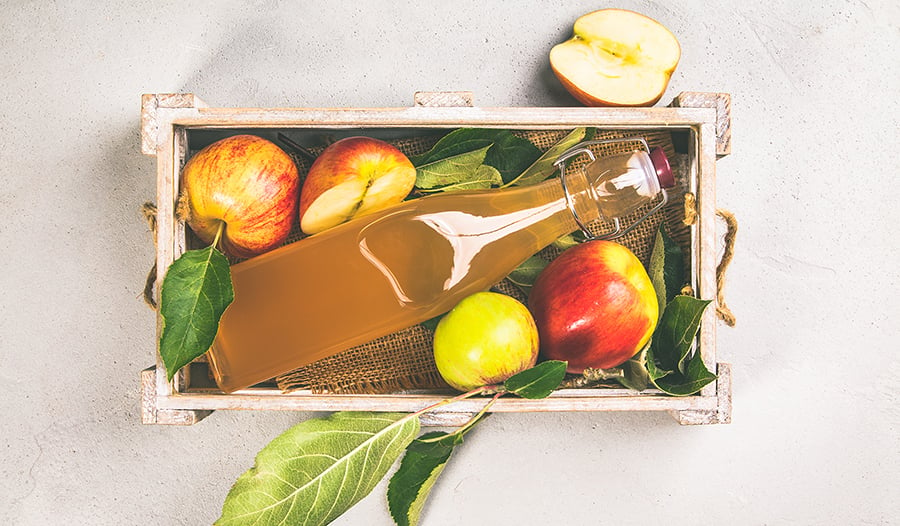 Apple cider vinegar (ACV) is a pantry staple that has created a lot of buzz in the health and wellness world. It has been a popular topic in recent years with discussed benefits from beautiful skin to weight loss.

Traditionally used in cooking, apple cider vinegar is a great way to add a pop of flavor to your food without adding too many calories, salt, or fat. This versatile ingredient is also used in a multitude of other ways, including as a cleaning agent, a hair wash, mouthwash, antiseptic, food preservative, skin toner, exfoliator, and more.

The main reason apple cider vinegar has become so popular in recent years is because of its many potential health benefits. As people look to improve their health in more natural ways, apple cider vinegar is an ingredient that has garnered a lot of interest. We are learning that it may play a potential role in many aspects of our health including controlling blood sugar, improving digestion, decreasing cholesterol, and aiding with weight loss.

Apple cider vinegar has a strong taste and smell thanks to acetic acid, its main active ingredient. Fortunately, even if you’re not a fan of its pungent flavor, you can still reap the potential benefits of apple cider vinegar with ACV supplements. Apple cider vinegar is available as a liquid or a pill. ACV supplements in pill form contain the dehydrated form of the vinegar. The concentration of acetic acid in supplements typically ranges anywhere from around 250mg up to 1600mg per pill, with most brands containing around 500mg. Some brands of supplements may additionally contain other compounds with the ACV such as Bioperine, which helps the body better absorb the vinegar. Some brands may include other ingredients combined with the ACV such as cayenne pepper, grapefruit (to aid in digestion), beetroot, pomegranate, or black currant (for color and flavor). As with all supplements, it’s always important to read the label to see exactly what ingredients you’re getting. Because of the limited amount of research that exists on ACV supplements, there is no standard dosage, so be sure to follow the package directions and consult with your healthcare provider.

‌‌‌‌1. Apple Cider Vinegar Has Been Used for Centuries

Although apple cider vinegar is trending now, it’s actually one of the oldest known natural health remedies and has been used for thousands of years in both cooking and medicine. Ancient Egyptians used it to treat wounds and also drank it for good digestion. Ancient Romans also took advantage of its digestive properties. They would keep bowls of it on tables at large banquets for soaking bread to aid digestion after a big feast. Around 400 BC, Hippocrates, the founder of modern medicine, prescribed vinegar as a tonic for general health and used it as an antibiotic, a digestive aid, an antiseptic for cleaning ulcers and sores, and a treatment for a variety of other illnesses including colds and cough. The antiseptic properties of vinegar have led to it being used throughout history for cleaning and disinfecting soldiers’ wounds in battle and it was used as recently as the American Civil War for wound healing. As you can see, vinegar has quite a long and interesting history.

To understand this better, it’s important to know the process by which apple cider vinegar is made. ACV is made with apples, yeast, and sugar in a 2-step process of fermentation. In the first step, the apples are crushed and mixed with yeast, starting the fermentation process. The sugar that’s produced by the apples is turned into alcohol. In the second step, a bacteria called acetobacter further ferments the alcohol, creating acetic acid. Acetic acid is the main active component of vinegar and it provides its classic tangy taste. It's also the main compound responsible for its health benefits.

A membrane-like material is formed during the second step of the fermentation process. It’s composed of a combination of bacteria, proteins, and enzymes. This is referred to as the “mother.” If you look at a bottle of apple cider vinegar, you may see strands of it floating around. Some products filter it out to make them look more appealing but the mother imparts additional nutritional benefits.

The bacteria in the mother are the good, gut-friendly bacteria that we commonly refer to as probiotics. Probiotics help keep your digestive system running smoothly and also help maintain a healthy immune system. 70-80% of your immune cells live in your digestive tract, so a healthy GI tract means a healthy immune system and an enhanced ability to fight off infections. Just like with ACV liquid, the vinegar used in supplements can also be filtered or unfiltered so some contain the mother and some don’t.

Apple cider vinegar also contains bioactive compounds that contribute to its health benefits such as polyphenols. Polyphenols are plant-based antioxidants that help neutralize harmful free radicals in the body and may help prevent chronic disease.

One of the most studied health benefits of apple cider vinegar is its ability to help regulate blood sugar. Diabetes is a medical condition characterized by elevated blood sugar levels. This is caused by either insulin resistance or a lack of insulin produced by the body. Diabetes is a worldwide public health problem. In the United States alone, the number of people with type 2 diabetes is expected to increase by 50% in the next 25 years. Apple cider vinegar has shown great promise in helping to lower blood sugar responses after meals and improve insulin sensitivity. These findings are supported by several clinical trials.

In one study, participants were fed a high carbohydrate meal along with either 20 grams of apple cider vinegar or a placebo. Blood samples were collected 30 and 60 minutes later. The ACV groups had lower blood glucose levels as well as improved insulin response. Other studies have shown that ACV may also help reduce fasting blood sugar. In one small study on diabetics, participants who consumed two tablespoons of apple cider vinegar before bedtime had lower fasting glucose levels the next morning.

The exact mechanism by which ACV reduces blood sugar is still unknown and possibilities include delayed stomach emptying and blocking starch absorption. Additional research on ACV’s mechanism of action is needed as well as research on how it can potentially be used as an adjunct treatment modality for diabetes.

Animal studies have found that apple cider vinegar may lower cholesterol and triglyceride levels. However, studies in humans are limited. Two small studies in humans found that consuming apple cider vinegar could lower total cholesterol, LDL (“bad”) cholesterol, and triglycerides over a course of eight or 12 weeks. Although the results are encouraging, more clinical trials are needed to investigate ACV’s lipid-lowering potential.

Some studies have shown that vinegar can increase satiety, which is the feeling of fullness. Increased satiety could lead to eating fewer calories and thus losing weight. Animal studies have shown that acetic acid can reduce fat storage, increase metabolism, and suppress appetite in mice and rats. The research in humans isn’t quite as robust. A widely quoted 2009 trial from Japan studied 179 obese subjects who were assigned to drink zero, one, or two tablespoons of vinegar a day. After 12 weeks, those participants who consumed vinegar had lower body weight, BMI, visceral fat, waist circumference, and triglyceride levels than those who did not consume any vinegar. A more recent randomized controlled trial from 2018 found similar results. 39 participants all followed a restricted-calorie diet. One group consumed apple cider vinegar twice a day and the other group consumed none. While both groups lost weight after 12 weeks, the apple cider vinegar group lost more. They also had reduced BMI, hip circumference, cholesterol, and triglyceride levels (and increased HDL levels). Participants in this group also experienced a reduction in appetite. These studies were on the small side and only followed participants over the short term, however, so additional studies are needed.

Undiluted apple cider vinegar is highly acidic and can actually damage the enamel on your teeth. This can make you more susceptible to tooth decay and cavities and lead to tooth sensitivity. Large amounts may also potentially cause irritation and damage to the tissues of the mouth and throat. With ACV supplements, you can avoid these potential complications.

There have been some reports of throat irritability, nausea, and indigestion after taking ACV. Long-term ACV use has also been reported to cause low potassium levels. This is particularly important for people taking medications that can lower potassium levels (such as diuretics used to treat high blood pressure). In addition to diuretics, ACV may also negatively interact with other medications, such as oral diabetes medications, insulin, and digoxin. ACV may also cause delayed stomach emptying in people with insulin-dependent diabetes mellitus. This can make it more difficult to control blood sugar and can lead to hypoglycemic episodes. As with all medications and supplements, be sure to check with your healthcare provider before starting ACV supplements.

4 Apple Cider Vinegar Gummy Benefits According to a Dietician

​​Apple cider vinegar has a long list of health claims, but do they stack up? A dietitian explains what ACV can do for your health, and the best way to take it.

Have you heard of berberine? Find out why this phytonutrient may have benefits for blood sugar health, cholesterol, and even liver health.

What Is Fenugreek? Here Are Its 7 Potential Health Benefits