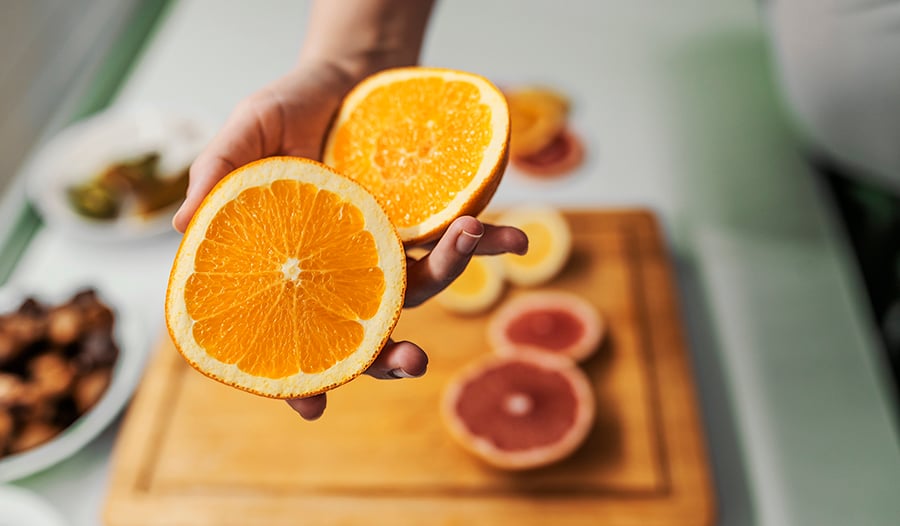 Ascorbic acid is more commonly known as vitamin C. A potent water-soluble vitamin with various essential functions in the body, it can be obtained from certain foods and consumed as a dietary supplement. Vitamin C has antioxidant properties and is an enzyme “co-factor” for at least eight important biochemical reactions in the human body.

Unlike most mammals, humans cannot synthesize vitamin C from glucose, which is why we need to obtain it from foods or supplements. Scientists believe that our human ancestors underwent a genetic mutation eon ago which resulted in our losing the ability to make our own vitamin C.

When consumed, vitamin C is absorbed in the small intestine, and the concentration in the blood is controlled by the kidneys, which will excrete excess vitamin C, if present, in the urine. Within the human body, the largest concentration of vitamin C can be found in the pituitary gland, adrenal glands, brain, leukocytes, and the eyes.

‌‌‌‌Where Do We Get Vitamin C Naturally?

Foods rich in vitamin C include a colorful variety of fruits and vegetables. Citrus fruits such as orange, grapefruit, strawberries, guava, and kiwi contain high levels of vitamin C.

The best way to ensure appropriate intake of vitamin C, along with other vitamins and minerals, is to eat a balanced diet with foods that represent a range of colors. Although it is ideal to obtain most nutrients through diet, supplementation of vitamin C can be beneficial to assist in obtaining overall vitamin needs. In general, multivitamins are a great source to add to a daily regimen to ensure adequate intake of vitamins and minerals, including vitamin C.

At doses less than 100 mg, vitamin C is found in most multivitamins. If a higher dose is desired, like 500 mg to 1,000 mg, a separate vitamin C supplement can also be used. For most, taking vitamin C in the dose advised on the label is advised.

‌‌‌‌What Happens if You Are Deficient in Vitamin C?

Long-term chronic deficiency of vitamin C is the cause of a potentially fatal disease known as scurvy. However, many also have signs and symptoms of vitamin C deficiency that don’t reach a fatal level but are simply too low to reach optimal health.

Symptoms of vitamin C deficiency include:

Risk factors that put people at risk of vitamin C deficiency include:

The best way to treat a vitamin C deficiency is by supplementing and reversing the issue that led to the deficiency in the first place. Blood tests can be done to measure blood levels of vitamin C, but these can be costly and are not routinely undertaken. Ideally, a doctor should rely on the patient’s clinical symptoms and take a good medical history to evaluate vitamin C status.

‌‌‌‌Can You Take Too Much Vitamin C?

Common symptoms of excess vitamin C levels are typically related to issues in the gastrointestinal tract — diarrhea, abdominal bloating, cramping, and nausea. Some research has found that elevated consumption of vitamin C can lead to false-negative stool guaiac tests, which can be used to screen for colon disorders. Most people can tolerate 2,000 to 3,000 mg per day of vitamin C when taken orally. Since vitamin C is water-soluble, the body will excrete unneeded vitamin C through the urine.

‌‌‌‌How Much Vitamin C Should I Take Daily?

According to the National Institute of Health (NIH is a health organization in the United States), the minimally recommended amount of vitamin C depends on age and gender. However, while these small amounts are what is required to prevent scurvy, they may not be adequate for optimal vitamin C blood levels.

Most adult males need at least 90 mg per day, and a female adult requires 75mg per day. In pregnant women and the elderly, recommended consumption is no less than 120 mg of vitamin C per day.

For tobacco smokers, vitamin C deficiencies can be even more dramatic. It has been estimated that one cigarette will oxidize between 30 to 40 mg of ascorbic acid per cigarette. This means that most tobacco users may need over 1,000 mg per day of ascorbic acid to make up the difference. Low vitamin C blood levels and excess oxidation likely explain why smokers commonly begin losing teeth by their 50s, have thinning skin, and easily bruise when compared to non-smokers.

‌‌‌‌Vitamin C And The Common Cold

Vitamin C has been extensively studied because of its benefit in immune defense, including fighting of major infections as well as the common cold. The common cold, or an upper respiratory infection, is the most common infection a person will contract in their lifetime. It is estimated that over 200 strains of cold viruses exist.

Taking vitamin C supplementation in treating or preventing the common cold has been a controversial topic. Much research conducted has shown that although vitamin C does not seem to prevent the common cold, in normal dosing, it does decrease the duration and severity of symptoms that manifest from common cold, such as fever, chills, aches, and pains, when a supplement is taken consistently. Research has suggested that the reduction of cold symptoms was found to be eight to nine percent, which is approximately half a day’s worth of symptoms.

One study looked at 463 students. Half of the participants received a high dose of vitamin C at 1000 mg, three times a day with a IV bolus of 1000 mg hourly for the first six hours administered before or after the onset of cold symptoms. This controlled group was found to have relieved and prevented the symptoms compared to the group that did not receive high doses of vitamin C.

A 2014 study showed that vitamin C could reduce the risk of developing a cold and also reduced the duration of the cold when compared to placebo (sugar pills).

Literature has also suggested that combining vitamin C and zinc showed stronger evidence of symptom relief. This particular study was a double-blind, randomized, placebo-controlled trial in which participants received 1000 mg vitamin C and 10mg of zinc. The results showed that the supplementation of both reduced the duration of symptoms over a five-day treatment.

A study published in July of 2020 was interested in the role that vitamin C plays in acute respiratory infections. The results, similarly to those of the common cold, showed that oral intake of vitamin C at onset of symptoms helped with reducing the duration of symptoms but not in the prevention or treatment of the infection.

Sepsis is a life-threatening bacterial infection of the blood that kills millions of people around the world annually. There is recent research that looks into vitamin C as a possible treatment for sepsis based on its anti-inflammatory properties and its potential antioxidant abilities.

A 2018 study showed evidence that administering vitamin C in addition to the standard therapy of sepsis, improved patient outcomes. However, more research is indicated to fully conclude the exact benefits of vitamin C for sepsis. I have seen hospitals in the United States adding IV vitamin C to their hospital treatment protocols.

Vitamin C has been studied for its antioxidant role in cardiovascular disease. Clogged arteries are also known as arteriosclerosis, a condition where blood flow is affected. A 2017 study in the Journal of Nutritional Biochemistry demonstrated that rose hips, which are rich in vitamin C, helped prevent atherosclerosis, an early indicator of heart disease.

Atrial fibrillation is a heart condition that is diagnosed when the heart has an irregular beat. The risk for this condition increases as one ages and also can occur after a person undergoes heart surgery. A 2018 study in Nutrients showed that patients given vitamin C after heart surgery were less likely to develop atrial fibrillation when compared to those not given vitamin C.

Vitamin C is very well known for its antioxidant benefits for skin health when used topically. The skin is a barrier that naturally contains vitamin C to protect us from environmental damage caused by UVA/UVB rays, and it also stimulates collagen synthesis. As we age, vitamin C decreases, which is why we see a loss of collagen and elastic fibers in the dermal layers. Eventually, that degradation and loss of elasticity causes skin drying and forms wrinkles.

It is believed that by supplementing vitamin C with topical vitamin C serums and even oral supplements, one may be able to slow the many consequences that arise from low levels of vitamin C in the skin that occur with aging.

A 2017 research study pointed out that in addition to its anti-aging properties, the most beneficial role that vitamin C plays for skin is its wound-healing effect. It describes its anti-inflammatory properties and increased collagen production, which in turn speeds up healing. In addition, the study found that when supplementing with oral vitamins C and E, there was improved rate of healing in children with extensive burns. The study also suggests that the topical application of vitamin C in a silicone gel showed a significant reduction in the formation of scars.

Although topical forms of vitamin C have shown promise, nutrition is vital for the health of our skin, so it is important to consume essential vitamins through diet. There is no doubt that vitamin C is an essential vitamin with multiple health benefits, and we should all be ensuring adequate intake.

There are conflicting reports when it comes to vitamin C and kidney stones. Vitamin C is metabolized into oxalate, which is believed to increase the risk of kidney stone formation.

However, a 1999 study in which 85,557 subjects were prospectively studied concluded, “Routine restriction of vitamin C to prevent stone formation appears unwarranted.”

Some clarity was offered by a 2016 study in the American Journal of Kidney Disease, which found that supplementing with vitamin C was associated with a significantly higher risk of kidney stones in men only, while there was no increase among women. A prudent recommendation may be to keep vitamin C to less than 1,000 mg per day if you are at risk for kidney stones.

Vitamin C, also known as ascorbic acid, is an important water-soluble vitamin that has many health benefits. Those with chronic disease and poor health habits have lower levels. Consuming a diet rich in nutritious foods is crucial. For those who need more vitamin C, it can be consumed in a multivitamin, vitamin C powder, vitamin C supplements, or vitamin C gummy formulations.

A doctor unpacks the differences between vitamin C forms including ascorbic acid, liposomal vitamin c, and Ester-C as well as the benefits of each.

Vitamin C, also known as ascorbic acid or ascorbate, has been one of the most researched vitamins over the last 50 years. A search of the scientific literature reveals that over 53,000 studies have been conducted on vitamin C since 1968. Their findings show that it helps promote a strong immune system as well as cardiovascular, brain, and skin health among many others benefits.

Vitamin C for Kids: Is Your Child Getting Enough?

What are the recommendations for vitamin C for children? A pediatrician weighs in on proper vitamin dosage, deficiency risks, quality, and more.