Eat More of This Nut To Improve Your Digestion 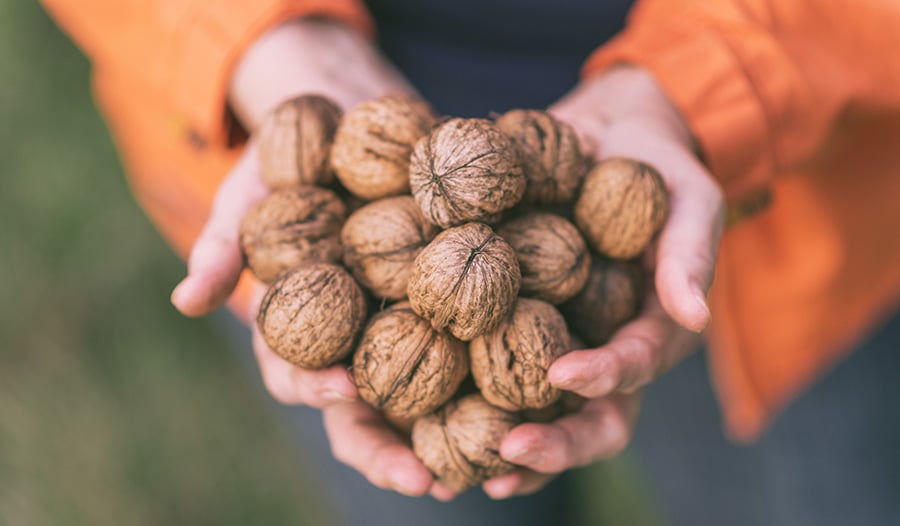 When it comes to adding nutrition to a meal or snack, nuts are an easy win. They are portable, shelf-stable, and come in so many varieties that you’re bound to find one that lights up your taste buds. Nuts are also full of nutrients that have been shown to have beneficial effects on heart health, blood sugar balance, brain health, and now, with promising research, for gut health, too! Walnuts are one nut that has recently been gaining attention for their impact on digestion and are being talked about as a potential new superfood for microbiome health.

While it’s no coincidence that walnuts look like the brain in our head - their antioxidant properties have been shown to influence mental functioning - it is becoming common knowledge that our gut is considered a “second brain,” so to speak. So, it’s not surprising that walnuts are being linked to a happy gut as well!

With all of the nuts out there, what makes walnuts such a superfood? This small shelled nut is the only nut significantly high in omega-3 fatty acids, specifically alpha-linolenic acid (ALA). This fatty acid is considered “essential” and is crucial for normal development. ALA has been shown to be important in reducing inflammation, decreasing LDL cholesterol and the risk of cardiovascular disease, and improving brain health. Flaxseeds and chia are the only other seeds that have walnuts beat in this omega-3.

In one ounce of walnuts, there are four grams of protein, two grams of fiber and a good amount of magnesium, which is important for nerve functioning and blood sugar control. They are proud wearers of the American Heart Association’s Heart-Check Mark indicating their value as a way to improve overall diet quality.

The benefits speak for themselves, and the taste does, too! With a toasty flavor, walnuts pair well with sweet and savory spices, making them easy to add to a wide variety of dishes. Chopped or whole walnuts work well on top of oatmeal, they can be ground into nut butters or a flour for baking projects, and walnut oil can lend a rich flavor to salad dressings.

That all sounds delicious, right? Now, let’s take a closer look at how walnuts can specifically improve your digestion.

Walnuts May Improve the Gut Microbiome

The human gastrointestinal tract is rich with bacteria and cultivating healthy communities of microbes is important for systemic health. The good bacteria in the gut are able to ferment nondigestible fibers and produce beneficial substances - short-chain fatty acids (SCFAs) - that can directly impact blood sugar balance, hormone and appetite regulation, and even weight. A high-fat, processed Western diet is often lacking insufficient dietary fiber and if this pattern of eating is consistent over a long period of time, one’s chances of systemic inflammation, digestive diseases, cardiovascular disease and other chronic disease is greater.

The good news is, scientists have conducted research showing that even short-term changes in the diet to introduce more fiber can change the gut microbiome for the better. In a study published in the Journal of Nutrition, a small group of healthy adults was fed a control diet for three weeks, followed by the same diet supplemented with 1.5 servings (42 grams) of walnut halves and pieces for another three weeks. Various health markers were observed, but the main interest was on changes to the gut bacteria. They found that the addition of walnuts reduced pro-inflammatory bile acids generated by gut microbes and shows promise in an increase in a “good” bacteria, Faecalibacterium, that has been shown to reduce gut inflammation.

In a larger study conducted on healthy females for eight weeks, it was observed that 43 grams of walnuts per day significantly altered the composition of gut bacteria. There was a richer population of bacteria from the genus Ruminococcaceae and Bifidobacteriaceae, which are known for their probiotic properties and ability to exert positive health benefits, specifically regarding inflammatory bowel disease and colon cancer.

For reference, forty-two grams of walnuts is equal to about a half cup, which is very easy to consume in one day! Pack yourself a walnut and dried fruit trail mix for a snack or grind them into a rough flour and use it as a breading for fish for two easy walnut wins.

Clearly, walnuts are helpful for creating a healthier environment for the microbiome, but even more research is making headlines for their impact on specific digestive disease states.

A Mediterranean diet, which promotes daily seed and nut consumption, has been touted as a dietary pattern for the prevention of chronic diseases. Colorectal cancer is the third-leading cause of cancer-related deaths in the United States and diet has been linked as a strong defender against its development. The high fiber, omega-3, and vitamin E content of nuts have specifically been linked to decreased inflammation and polyp burden.

In 2016, a study using mice was conducted to determine the effect of walnuts on colon tumor carcinogenesis. The mice were fed a walnut-supplemented diet, at varying amounts, and there was a slight reduction in both the number and volume of tumors in mice that consumed the diet with 9.4% walnuts compared with mice on the control diet. Also, there was a modest trend toward increased tumor number and size at higher concentrations of dietary walnuts. This suggests that there might actually be an optimal level of walnut intake for cancer prevention.

More recently, walnuts have shown promise as a treatment for ulcerative colitis (UC). This inflammatory bowel disease is characterized by deep ulcers (sores) along the large intestine that manifests as “flare-ups” among periods of remission. These flares can cause diarrhea, abdominal pain, poor nutrient absorption, and even dehydration and weight loss. A team of researchers at UConn Health and Texas A&M University tested the effect of walnuts on UC in mice.

They suspected that the anti-inflammatory properties of walnuts would help repair and even strengthen the intestinal mucosa from flares. The mice were fed a diet of varying concentrations of ground walnuts and the results ultimately showed that mice consuming the human equivalent of 20 walnuts per day had less injury to their colon’s mucus lining and even showed faster regrowth of healthy digestive tissues. It is promising research that shows that this superfood nut may actually “train” the gut to suppress inflammation and protect against ulcers in the first place.

Increasing Walnuts in Your Diet

Walnuts are clearly a nut worth investing in! Their omega-3 concentrations and indigestible fibers may positivity impact gut health, which in turn can help prevent inflammation and larger systemic disease. If you’re not so excited about munching on dried walnut halves for a snack, try the following fall-themed recipe to get your daily dose of this digestive superfood.

Nuts and seeds are a nutritional powerhouse packed with excellent health benefits. Discover the 16 superfoods that can help get you feeling your best!

Tips to Get Kids to Eat Their Vegetables

As a pediatrician, I’m often asked by parents for tips and tricks when it comes to convincing kids to eat their vegetables.

Many different eating styles have become popular lately, so it can be tricky to tell them apart. Each eating lifestyle comes with its own unique health benefits, but they all have different sets of rules. Keep reading to learn more about how the raw food, vegan, vegetarian, paleo and gluten-free eating lifestyles work and discover a new favorite recipe.